HomeEventsRoxy Regional Theatre has Exciting Lineup and Changes in store for Season...
Events

Clarksville, TN – The Roxy Regional Theatre is gearing up to celebrate 34 years of presenting live theatre in the heart of Historic Downtown Clarksville on the corner of Franklin and First.  The Roxy has long been regarded as “the cornerstone of downtown re-development,” and SEASON 34 will see new productions and exciting changes to the programming and structure of the theatre.

Ryan Bowie, longtime company member and former Director of Fundraising and Development, will take the reins as the organization’s new Executive Director.

While leading Clarksville’s professional live theatre into SEASON 34 and beyond with hit musicals and classic plays, Bowie is also ushering in an inclusive approach to Clarksville and Middle Tennessee’s use of the Roxy’s building space.

The Roxy Regional Theatre’s “On the Terrazzo” Series is back to kick off SEASON 34 with a new musical revue, “Kit Kat Club”.  Sit back and enjoy the intimate setting of the theatre’s lobby as the cast brings Berlin back to Broadway.

The mainstage series opens with the hit Broadway musical, “Million Dollar Quartet”, following Elvis Presley, Johnny Cash, Carl Perkins and Jerry Lee Lewis on one magical night in a recording studio at Sun Records in Memphis, Tennessee.  The quartet will also grace the stage during GALA 34, the official kickoff of the 2016-2017 season. 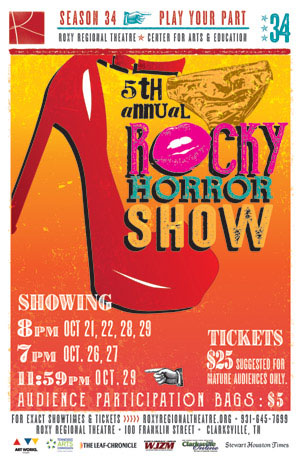 October’s lineup will light up theotherspace, the Roxy’s 50-seat black box theatre upstairs, with Fred Barton’s “Miss Gulch Returns!”, where audiences will get a closer look at the other villain of The Wizard of Oz.

The Roxy Regional Theatre’s signature production of Richard O’Brien’s “The Rocky Horror Show” is back on the mainstage for its fifth year and just in time for Halloween — complete with a special midnight showing!

“Henry V” will be the Roxy’s 32nd Shakespeare production since the theatre’s inception in 1983.

Opening on Thanksgiving Day, Harry Connick, Jr.’s new musical “The Happy Elf” provides the perfect complement to the holiday season.  Bring the entire family to find out if Eubie the Elf can get Bluesville off Santa’s naughty list this year! 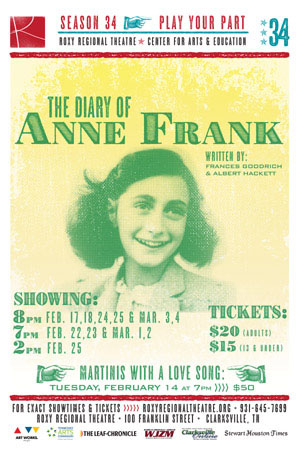 Eve Ensler’s “The Vagina Monologues” will kick off 2017 in theotherspace, celebrating 15 years at the Roxy Regional Theatre, followed by a moving production of “The Diary of Anne Frank” on the mainstage and Doug Wright’s World War II drama “I Am My Own Wife” in theotherspace.

In celebration of Dr. Seuss month, “Seussical: The Musical” will hit the mainstage in March and bring to life a host of colorful characters — including Horton the Elephant, The Cat in the Hat, Gertrude McFuzz, Lazy Mayzie and more — for children of all ages.

For a more adult night out, audiences can get to know Dr. Ruth Westheimer’s fascinating life and career as a radio and television sex therapist with theotherspace’s final production of SEASON 34, “Becoming Dr. Ruth”.

The recommended-for-mature-audiences-only humor continues on the mainstage with “[Title of Show]”, a hilarious musical about a musical by people who write musicals.

At the end of May, the Roxy Regional Theatre’s School of the Arts students will hit the mainstage with their production of Gilbert and Sullivan’s swashbuckling musical “The Pirates of Penzanze, Jr.”, a rollicking romp on the English seaside.

In the summer of 2017, Executive Director Ryan Bowie will return to the role of Hedwig Schmidt in the Tony award-winning musical “Hedwig and the Angry Inch”, back this year to rock the mainstage.

Rounding out the season are some of the most iconic Southern ladies to grace the stage in Robert Harling’s “Steel Magnolias”, an ageless tale of strong women and the final production in the Roxy Regional Theatre’s SEASON 34. 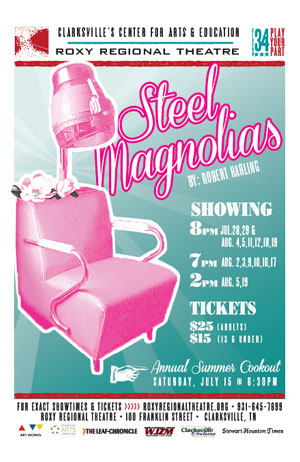 In addition to the season’s production lineup, the Roxy Regional Theatre is spreading its wings and offering outside performers and users the opportunity to rent and use the space.

The building will be available for everything from birthday parties and weddings, to conferences and outside performances — patrons will even be able to light up someone’s special day by personalizing the iconic marquee for the day.

Information about the new rental packages and rental application can be found at www.roxyregionaltheatre.org/rentals

The Roxy Regional Theatre’s School of the Arts, going strong for over two decades, will also return this fall with an exciting new curriculum and educational staff.  Beginning Saturday, September 10th, and running through December 10th, school will be in session every Saturday from 9:00am to 12:30pm for youth ages 10 to 18.

For more details about SEASON 34 at the Roxy Regional Theatre and to purchase tickets, please visit www.roxyregionaltheatre.org or contact the box office at 931.645.7699 or