Albuquerque, NM – The Nashville Sounds exploded for seven runs in the sixth inning in an 8-4 win over the Albuquerque Isotopes Thursday afternoon at Isotopes Park.

Albuquerque starter Eddie Butler carried a 1-0 lead and no-hitter into the sixth before the Sounds’ explosion at the plate.

Butler faced Tyler Ladendorf to start the inning and retired the left fielder on a groundout. The next four batters reached on three hits and a walk. Nashville (54-45) got on the board when Jaycob Brugman’s single up the middle scored Bryan Anderson who doubled earlier in the inning. 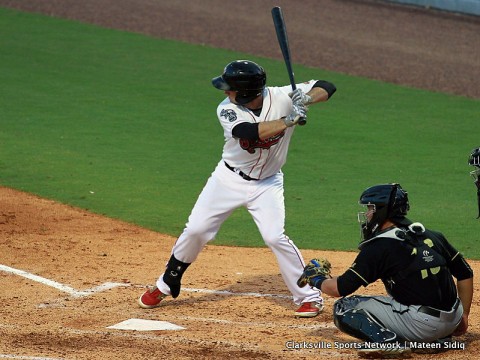 Chad Pinder followed with a run-scoring single of his own to give the Sounds a 2-1 lead. Butler came back to retire Max Muncy on a line out for the second out in the inning but the rally picked up again.

With Brugman and Pinder on base, Joey Wendle hit a booming two-run triple to give the Sounds a 4-1 cushion. It continued when Rangel Ravelo followed Wendle with a run-scoring double to left to make it 5-1.

Ravelo’s double was the final straw for Butler who entered the inning having allowed only one base runner in the game.

Brian Schlitter entered for Albuquerque (43-55) and was greeted by Matt Olson who launched a two-run blast to right field to conclude the seven-run outburst. It’s Olson 11th home run of the season.

As the offense continued to role, starter Chris Jensen was quietly putting together another quality outing. Just up from Double-A Midland, he limited the Isotopes to three runs on six hits in seven innings.

He was cruising along with a 7-1 lead until Dustin Garneau and Jordan Patterson cracked back-to-back homers off the right-hander in the bottom of the seventh.

Eduard Santos worked the final two innings and allowed a run before closing out the win to give the Sounds a 5-3 trip.

Ravelo was the lone Sounds player with a multi-hit game, and he joined Wendle and Olson with multi-RBI games.

The Sounds return to First Tennessee Park to begin an eight-game homestand set to begin Friday night against the Omaha Storm Chasers. Right-hander Raul Alcantara (0-0, 0.00) starts for Nashville against left-hander John Lannan (5-7, 4.95) for Omaha. First pitch is scheduled for 7:05pm.

The 2016 season is the Sounds’ 19th year in the Pacific Coast League and their second as the Oakland Athletics’ top affiliate. Season ticket memberships are available now by calling 615.690.4487 or by visiting www.nashvillesounds.com [1]