Clarksville, TN –  To pay tribute to a student population at the very heart of Austin Peay State University’s (APSU) mission, work recently began on a permanent art installation on the University campus, titled “The Cardboard Kids: Monument to the Non-Traditional Student.”

Non-traditional students come in all shapes, sizes and backgrounds. For some, marriage and a family changed their priorities, while others may have enlisted in the military or simply decided a four-year college wasn’t right for them after graduating high school. 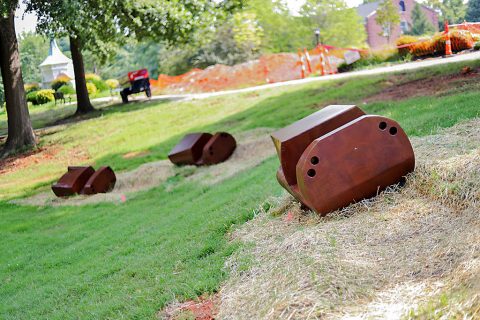 A look at an art installation piece outside of the Woodward Library on Friday, July 22nd, 2016 at Austin Peay State University. (Cassidy Graves, APSU)

Whatever the reason, each non-traditional student has a story and a unique journey that brought them back to school.

Created by Chris Boyd Taylor, a sculptor and instructor at the University of Alabama in Huntsville, “The Cardboard Kids” is the product of a striking realization after a brief visit by Taylor to campus in late 2015.

“As I spoke with the students at Austin Peay, I quickly realized that a large percentage of the student population fits into the wonderful category known as the non-traditional student,” Taylor said. “I met students who bring a welcome voice to the classroom because of their past and current experiences. As an educator, these students bring an attitude, maturity and perspective that have become invaluable in my own classroom.”

Comprised of three steel “vehicles” racing around one of APSU’s many crater-like filled-in bowls, the sculptures themselves have been made to look like they were created from cardboard. In each unique cart, the observer can see exposed tape and corrugation used in the construction of the sculpture, hinting at years of extended use.

The weathered, “stitched together” look of the vehicles was by design, Taylor said, as he hoped to reflect a student population that has been tested by the passage of time.

“As I designed these vehicles, they became proxies for the students themselves. I thought of individuals who have been bent but not broken, who have pieced things together well enough to be in school, students with unique stories to tell,” Taylor said. “Instead of making slick, streamlined vehicles, I designed vehicles using a material and process that highlights the grit and history inherent in the non-traditional student.

“It is my hope that this public art piece salutes those individuals who give an extraordinary effort to be at Austin Peay State University, and to remind them to enjoy their time while here.”

Taylor’s vision is a tribute to APSU’s unique student population, but it has also been designed to take advantage of the land on which the University has stood, in some form, for over 100 years. Built into the bowl that sits between the Morgan University Center and Woodward Library, “The Cardboard Kids” conforms to many of the current uses of the University’s 182-acre property.

“As I walked up and down APSU’s campus, I could not get over how sink holes dictate the topography and, in some ways, life at Austin Peay,” Taylor said. “Even more surprising was a sort of embracement of the ‘skate park’-like topography, placing picnic tables, sculpture and even the APSU logo itself, in these bowls.”

Taylor’s work was chosen out of numerous submissions from an international pool of artists and sculptors. Michael Dickins, APSU gallery director, said that it was a combination of form and function that made Taylor’s proposal stand out among the rest.

“We told the sculptors that we wanted to submit proposals that they could use the entire campus, but we really liked Chris’ proposal for using the bowl,” Dickins said. “A couple of years ago, we had a sound sculpture in the bowl and it was such a major success that we had always thought about doing something permanent in that space.

“That bowl is sort of the heart of the entire campus because it’s right between the books and the food with the library and student center.”

Work is currently underway on the installation, and Taylor will return to campus on August 30th for a reception and artist’s talk to coincide with the start of the Fall 2016 semester. The event is scheduled for 3:00pm in the Morgan University Center, room 303. A reception will precede the event at 2:30pm.

To find out more about Chris Boyd Taylor, visit www.walkingcubes.com [4]