Clarksville, TN – Clarksville Mayor Kim McMillan and two other women mayors who lead major cities in Tennessee were among a group of dignitaries who spoke Friday at a ceremony to unveil the Tennessee Woman Suffrage Monument.

Fittingly, the statue was shown to the world on Women’s Equality Day, the 96th anniversary of the date the Tennessee House voted 49-48 to ratify the 19th Amendment, ensuring passage of the measure granting American women the right to vote. 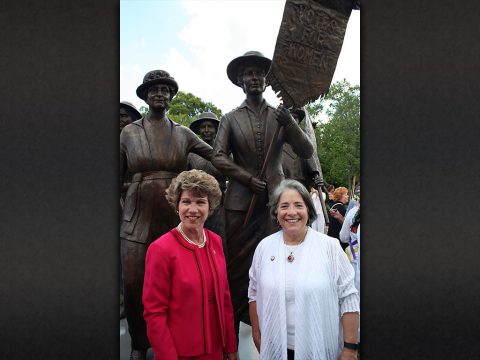 The monument, by Nashville sculptor Alan LeQuire, was commissioned by the Tennessee Woman Suffrage Monument organization to commemorate the importance of Tennessee’s role in granting women the right to vote.

McMillan got a warm reception from a red-hot crowd of more than 200 who gathered in Nashville’s Centennial Park on a sun-drenched, steamy hot morning near the Parthenon.

“Over the past 18 years or so I have campaigned and held elected office as a member of the Tennessee House of Representatives and now as mayor of Clarksville. It amazes me when women tell me they don’t vote or that they vote for the candidate their husband chooses,” McMillan said.

“This suffrage story that we celebrate today is a wake-up call for any woman who hasn’t realized that voting is more than a right, it’s a hard-won privilege that we can’t take for granted. Gaining the right to vote was the first step, but there is still much work to be done.”

Earlier in the program, Mayor Megan Barry of Nashville and Knoxville Mayor Madeline Rogero also gave brief remarks about how suffrage opened the path to elected leadership for women.

The five women honored in the new monument were present during the Tennessee ratification battle in 1920: Anne Dallas Dudley of Nashville; Abby Crawford Milton of Chattanooga; J. Frankie Pierce of Nashville; Sue Shelton White of Jackson; and Carrie Chapman Catt, national suffrage leader who came to Tennessee to direct the pro-suffrage battle.

Each played a critical role in history, especially Dudley, who staged a parade through the streets of Nashville in 1916 to demonstrate her support for women’s right to vote.

According to lore, five dozen vehicles traveled from the Capitol to Centennial Park. More than 2,000 people greeted the group led by Dudley, her husband, and their children, at the Parthenon. The event is regarded as Nashville’s largest women’s suffrage rally.

Guilford Dudley told a moving story about how his grandmother fought for him, showing the same grit and guile that would sustain her fight for suffrage. As an infant, doctors told his family that he was too sickly to live, Dudley said. But his grandmother refused to accept their diagnosis, and rushed him to a country doctor who fed him goat’s milk and resuscitated him.

“She obviously was an extraordinary person, and showed her powers to me early in my life,” he said.