Clarksville, TN – Clarksville Fire, Police, and Emergency Medical Services handled numerous serious calls-for-service overnight, beginning at 7:48pm with a report of a shooting at a residence on Lincoln Drive.

A 24-year-old man was transported by ambulance for a gunshot wound to the left thigh. The man reportedly shot himself by accident while cleaning a firearm.

Officers were dispatched to a shooting at a residence on Ryder Avenue at 2:22am Saturday. Numerous witnesses gave conflicting stories, but the shooting may have stemmed from a prior altercation at a nearby convenience store.

Two pedestrians then confronted some people in a vehicle on Ryder Avenue before firing several shots into a car.

A visitor who was standing in the driveway of a nearby residence was struck by a stray bullet in the left bicep. The man was transported to Tennova Heathcare with a single gunshot wound.

The car believed to be involved in the shooting was located a short time later after it crashed into a fence and a stop sign on Caskey Drive. Anyone with information about this shooting or the altercation is asked to contact Detective Brittany Feinberg at 931.648.0656, ext. 5156, or the TIPS line at 931.645.TIPS.

A house fire on the 400 block Notgrass Road was reported at 2:52am. Two residents, 84-year-old Leo Richardson and 77-year-old Patricia Richardson, died inside the home as a result of injuries from the fire. The cause of the fire is under investigation.

First responders were dispatched to another fire at a trailer park on Power Street at 4:28am. Two injured people were transported by LifeFlight helicopter for medical treatment. The single-wide trailer was destroyed. Some next door neighbors initially refused to evacuate until they were eventually persuaded to leave by police.

A possible domestic disturbance was reported at the residence shortly before the fire.

At 5:22am an officer who had just been released from the Ryder Avenue scene, stopped at a Fort Campbell convenience store to use the facilities when he encountered a woman with five arrest warrants on file. Officer S. Deering confronted Lakeitra Withrow, a 23-year-old Clarksville resident, about the warrants.

Deering stated that Withrow initially lied about her name, claiming to be her sister. Deering, who briefly struggled with the woman when she resisted arrest, added a charge of criminal impersonation to her five outstanding capiases for Driving on a Revoked License, two Unlawful Drug Paraphernalia charges, and two Simple Possession charges. 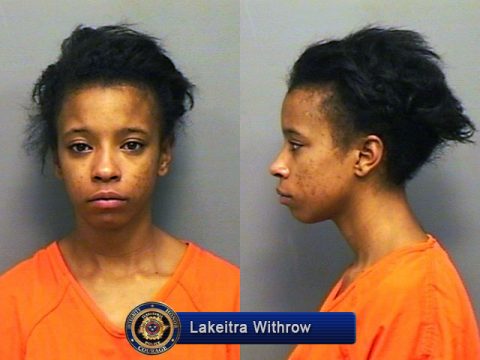 Deering was called back to the jail after booking the woman, because alleged drugs and drug paraphernalia were found when Withrow was more thoroughly searched by a female corrections officer. Withrow’s charges now include Introducing Contraband Into a Penal Institution.

Officer Deering stated, “It’s amazing how a shift can start so quietly and then turn into a night like this.”