Ledbetter, KY – Consistency was key for Austin Peay State University women’s golf in Monday’s 36-hole outing at the Drake Creek Invitational, which finds the Govs in fifth place with 18 holes to play.

How consistent? The Govs shot 306 as a team in the first round… and 306 again in the second. 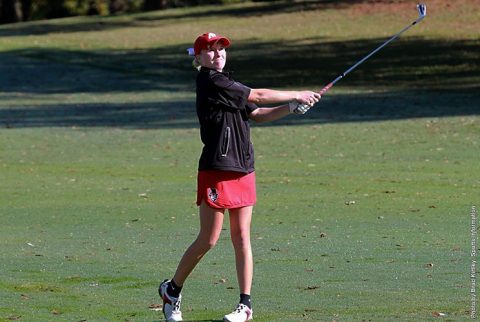 Of the five Governors who counted toward the team score, no player posted a round in the 80s over the first 36 holes—Austin Peay had just one round with all five players below 80 during the entire 2015-16 season.

“We were pleased with our start today,” said head coach Sara Robson [1]. “We did a lot of things very well. It was great to have all five players break 80 for two straight rounds.”

Junior AnnaMichelle Moore [2] and sophomore Taylor Goodley [3] led the charge in the first round with matching scores of 76. For Moore, the opening-round 76 built off her final-round 76 at last season’s OVC Championships—her best round of 2015-16.

Goodley bettered her score by two strokes in the second round, shooting a team-best 74 that equaled her career-best as a Governor; she’s tied for eighth with a round to go. Her sister Ashton was one shot behind with a 75, and her two-round 152 (77-75) has her tied for 15th.

“Taylor and Ashton both had steady rounds for us,” Robson said. “AnnaMichelle played well today; she just had some putts get away from her in the second round.”

“Sarah played really well,” Robson said. “She missed some shots in hazards that kept her from scoring better. I was proud of how Kauffman fought today; she had some frustrating swings and didn’t let them get her down. She kept fighting.”

“Amber played well today,” Robson said. “A couple of swings got her in trouble and she needs more putts to drop tomorrow. Kelsey had a great second round, so proud of her comeback. She stayed away from big numbers and had no three-putts.

“I’m proud of Meghann and the start of her career. She hit the ball well in the first round and settled down and made some putts in the second round.”

“We’re looking forward to a great round tomorrow with no big numbers,” Robson said. “That will give us a chance to move up.”

Tight front nine, with many water hazards throughout the course.
September 12th – 13th