Northern, Iraq – Staff Sgt. Darryl “Gunny” Joseph leapt into the night of northern Iraq as the UH-60 Black Hawk helicopter touched down, the dust from the rotary wash clouding his vision. His mission was simple: set up the landing zone and guide in the aircraft carrying the M777 artillery pieces to the raid site.

The process of setting up a landing zone, or sling load area, was not new to him. Back at Fort Campbell, Kentucky, Joseph and the Soldiers from Battery C, 1st Battalion, 320th Field Artillery Regiment, 2nd Brigade Combat Team, “Task Force Strike,” practiced sling load operations many times before.

But this was not a training exercise; this was the real deal. 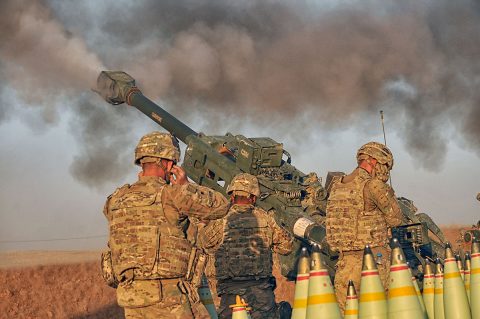 Task Force Strike advises and assists Iraqi security forces with planning and intelligence, training and equipping, and, on this night, indirect fires.

Raids are fast and deliberate operations, said Sgt. 1st Class Juan Burkett, the platoon sergeant with 1st platoon, Battery C. The artillerymen can move to a location quickly to set up and fire, without the enemy having knowledge of their locations.

“Whenever we go into an artillery mission, it’s always the same,” said Burkett. “It’s to support whatever assets we have forward.”

Since Battery C arrived in Iraq they have been providing indirect fire support to the ISF as they maneuver against the Islamic State in Iraq and the Levant. Battery C has executed hundreds of missions and fired thousands of rounds in support of ISF operations since taking over for the 26th Marine Expeditionary Unit at the Kara Soar Base in late May.

Joseph moves into the night to setup the hot landing zone, or HLZ, and when the next helicopters arrive at the raid site everything must be set up perfectly. Every extra second spent trying to download equipment is another second that the Soldiers from Battery C can’t provide fire support.

None of this was new to Joseph; his experiences in Iraq began over a decade ago during Operation Iraqi Freedom, and he also attended the United States Army Pathfinder School. Army pathfinders provide navigational aid to incoming aircraft, and select, mark, improve, and control landing sites. 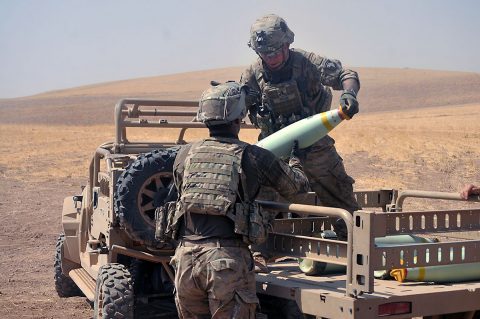 “Check that berm over there,” he says calmly, pointing the Soldiers in the right direction as they moved in the night. Before the mission began he studied the imagery of the location and understood where he would need to be that night. “Pop those chem lights and start shaking them.”

Joseph walks the location marked off for the incoming helicopters making sure it is visible in all directions. He moves purposefully as he and his team works, only raising his voice to overtake the sounds of Soldiers executing his orders.

“Do you have eyes on?” Joseph radios to the CH-47 Chinook helicopter pilots as they approach. Given the affirmative he watches as they float toward the landing zone. With a dull thud and a cloud of dust the guns are released onto the ground and the CH-47s turn off into the night.

The 101st is known for air assault operations and Fort Campbell, Kentucky, the home of the unit, is where the Sabalauski Air Assault School resides. For the team on the ground this operation was business as usual.

“Let’s go, let’s get a move on,” Joseph says to the gun crews as they begin the tasks needed to get their guns operable. Working under the lime-green hue of their night vision goggles they move their gun and begin setting up the systems, ensuring they are prepared to execute their upcoming fire missions. The Soldiers work throughout the night, and by first light they’re ready to fire.

Where the Magic Happens

Staff Sgt. James Johnson, the fire direction chief for Battery C, sits in the back of his fire direction center truck looking intently at his radio, waiting for a call for fire.

“This is where the magic happens,” Johnson says as he concentrates on his console.

Observers, which can consist of assets from the Iraqi security forces, unmanned aerial vehicles and other aircraft, acquire targets they need hit. Once the battalion headquarters located miles away in the tactical operations receives the data, they push it to Johnson and his team at the FDC.

“We process data,” says Johnson. “They [the artillerymen on the gun line] proceed to shoot.” 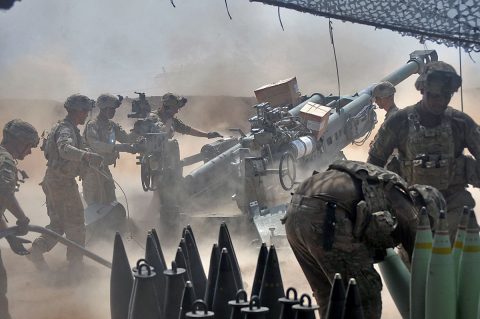 U.S Army Soldiers with Battery C, 1st Battalion, 320th Field Artillery Regiment, Task Force Strike, begin the process to load another round in their M777 artillery piece in northern Iraq, Aug. 15, 2016, during an operation to support the Iraqi army. Battery C is supporting the Iraqi security forces with indirect fires as they retake territory from the Islamic State of Iraq and the Levant. (1st Lt. Daniel I Johnson/Released)

A few hundred feet away from the FDC, gun crews are moving around their guns in full kit, checking and rechecking minute details, making small adjustments, waiting to spring into action once the FDC sends a message.

Just then the radio crackles and Johnson grabs his hand mic, listening to the data. He then begins his battle drill – one he’s done many times before. Johnson sends a message to the gun line, “Gun 2, fire mission.”

Down at Gun 2, the crew, led by Staff Sgt. Johnathan Walker, springs up as the radio beeps; in seconds they are at the firing position going through their crew drill.

“Come on,” Walker yells to the crew as they prepare rounds and take their positions. “Let’s make money!” The crew members look through the sites and adjust the gun as Walker yells the fire data. Attention to detail is critical during this mission; he must remember the data for each round his crew is going to fire.

“Fire!” yells the crew chief, and the Soldier pulling the firing lanyard gives it a slight tug. The gun responds to this small motion, shaking the earth around the position as a high explosive shell is launched. The next gun fires soon after and the race is on between the two gun sections, a little company competition to see who can fire rounds the fastest and most proficiently. The teams are motivated even in 100-plus-degree weather.

“Let’s get through this!” Walker yells as he calls off the quadrant – up and down – and deflection – left and right – for the next round. Driven by their chief, the Soldiers move faster as the mission continues.

The dash endures for a while as the guns launch round after round. Dust hangs in the air after each round is fired and sweat starts to sting Soldiers’ eyes as they try to blink through the salt. The ammo carriers continue running rounds weighing over 90 pounds from the holding point to the gun, heaving the shells into the firing tube. Walker’s voice grows hoarse as he continues yelling adjustments and commands.

Finally, the last round is reached.

“Last round,” the ammo bearer says as he walks up to Walker. With a nod, Walker gets ready for his last command of the mission.

“Ready – FIRE!” he barks bringing his hand down. After the last boom, the team begins to celebrate from the position.

What We Train For

“That was awesome guys,” says 1st Lt. Matthew Frank, their platoon leader as he walks up and gives the Soldiers high-fives. At one point during the mission he grabbed more rounds for them so they could keep going. “Everyone is impressed with what you did. You guys are making Mosul great again, one 155 round at a time.”

Walker smiles at the praise and the performance of the men. Taking off his helmet, he looks around the gun position.

“This is the life,” he says with a grin. “This whole operation is what artillery is about; shoot, move, and communicate.”

This is one of many missions that would be fired on this raid.

After a few nights, the gun raid is complete and the Soldiers rig their equipment to have it sling loaded back to their starting location. They’re tired and dirty, but morale is still high. Back at their main camp, a hot shower and rest are a high priority.

Joseph, who spent the past four days moving throughout the raid site doing his tasks, and was one of the last Soldiers to leave, stands in front of his tent. The dirt still clings to his uniform and his face as he relaxes.