Yorktown, IN – After breaking a school 54-hole record at last week’s Drake Creek Invitational, the question might be asked—what would Austin Peay State University women’s golf do for an encore? 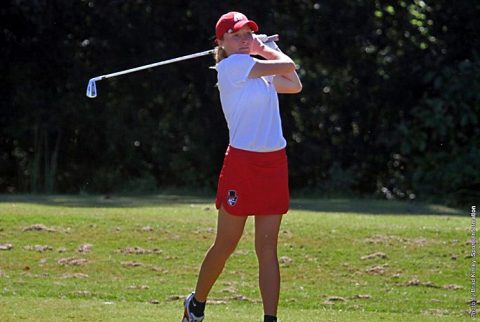 Thirty-six holes into the Cardinal Classic, the Governors are hitting on all cylinders again, posting a two-round 605 (302-303) that is the fourth-best mark in school history.

That has the Governors sitting in seventh with 18 holes remaining from the Players Club.

“I’m proud of the girls today,” said head coach Sara Robson [1]. “We are doing some really good things. We need to do a better job controlling the things we have the power to control, such as course management decisions, how we set up to tough lies, speed of putts, things like that. We’re looking to come out and play very well tomorrow.”

At 605, Austin Peay is just five shots back of Bradley and Northern Illinois entering the final round.

The 302 in the first round was the second-best by an APSU squad since 2014 and highlighted by sophomore Taylor Goodley [2], whose 74 had her in the top-10 entering the second 18 holes of the day.

She backed it up with another 74 in round two for a 36-hole career-best 148 and is tied for 12th entering the final round.

Goodley was consistent all day Monday, recording par or better on 31 of 36 holes.

Schutt led all Governors with six birdies over the first 36 holes, including both forays down the 356-yard, par-4 No. 1.

Final-round action begins 9:00am, Tuesday, with a shotgun start from the Players Club.