The Governors (5-4-0) and Eagles (3-5-1) will be the first match to kick-off the 2016 conference schedule. In last weekend’s matches, APSU suffered a 4-1 loss against an undefeated TCU team, Friday, then rebounded at home to edge out Chattanooga 3-2, Sunday. 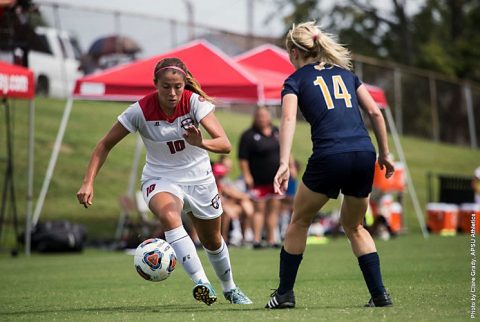 Junior forward Kirstin Robertson [1] was named OVC Offensive Player of the Week for her weekend performance, scoring APSU’s lone goal against the Horned Frogs before totaling two goals and an assist, Sunday.

She ranks tied for 18th in the nation with seven goals and also leads the conference in both goals and points (15).

She now ranks sixth in the OVC with a 1.20 goals against average. As a team, Austin Peay currently sits atop the goals scored rankings with 16 and just below SIUE in total points with 39.

Morehead State has won two of its three matches this season at its home complex, Jayne Stadium.

However, the Eagles carry a three-match losing streak into Thursday, with their most recent contest being a 2-1 defeat at Valparaiso. Ashley Ritchie leads the team in goals with three, while five other players each have recorded one goal this season.

Last season in Clarksville, the Eagles defeated APSU 2-1. Nicole Wojcik [3] gave the Govs a 1-0 lead in the 47th minute, but Morehead State answered back with two goals in two minutes beginning at the 55th minute mark to win. Morehead State leads the series 11-3-2 dating back to 2002, including four-straight wins over the Govs.

Redshirt freshman Pamela Penaloza [4] scored the goal Robertson assisted on, Sunday, her first goal as a member of the Governors. The Colombian attempted three shots in the match, and is becoming even more involved in and around the penalty area.

The Govs have mixed and matched with formations in the nonconference, but one consistency has been senior Natalie Smith [5] and freshman Melody Fisher [6] putting in a full day’s work. The two defenders played a combined 360 minutes in last weekend’s matches, both out wide and Smith moving inside to center back in a back four shape.

Be sure to follow all the Austin Peay soccer action at www.LetsGoPeay.com [7] and the official Facebook page of Austin Peay Athletics. In addition, live play-by-play coverage can be found on Twitter (@AustinPeaySocr), while Thursday’s match can be streamed at www.OVCDigitalNetwork.com [8]