Posted By Clarksville Online News Staff On Wednesday, September 21, 2016 @ 6:00 am In Education | No Comments

However, Ward’s time as a university student has taught him that there is much more to music than just his instrument – and that music is worth fighting for at the highest levels of government. 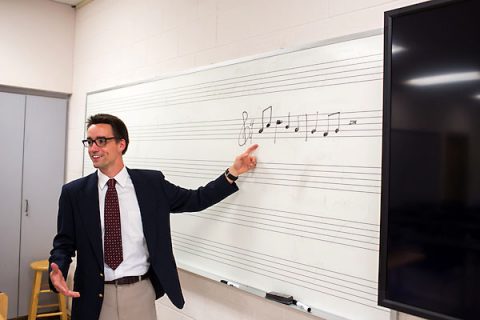 Ward was one of only three college students from Tennessee asked to join a delegation from the Tennessee Music Education Association (TMEA) on its annual lobbying trip to the nation’s capital.

TMEA is the state’s chapter of the National Association for Music Education (NAfME), the professional organization for music educators across the country. Ward, a member of APSU’s collegiate chapter of NAfME, joined the organization’s leadership team and students from The University of Tennessee and The University of Tennessee at Martin for the trip.

The primary mission of Ward and his TEMA group was to lobby for the role of music education within the recently passed Every Student Succeeds Act (ESSA). Signed into law by President Obama in December 2015, ESSA identifies music education, along with a number of other subjects, as core-curricular that every school must make available in the classroom.

“We had to fight to get music education included as a part of the law because now music teachers around the country have legal standing and a right to offer music education to their students,” Ward said. “Over the years, music programs were among the first things to be cut when schools cut their budgets, so it was a major victory to be included in that law.”

While music education is now a protected class according to the government, Ward said that the group’s mission was to ensure that it received proper government funding.

In June, the U.S. Senate Labor, Health and Human Services, Education Appropriations Subcommittee approved its Fiscal Year 2017 funding bill, which authorized $1.65 billion in funding for the Student Success and Academic Enrichment Grants (SSAEG), a new block grant authorized in Title IV, Part A of the ESSA. Despite the authorized amount, the actual recommended funding is $300 million – less than one-fourth of the original authorized amount.

If the recommended level of funding is approved, Ward said that it would result in individual schools receiving a trivial amount of funding for music education.

“What we previously fought for was to make sure that music education was a part of the law, but now we are fighting to make sure that it receives the funding it deserves by the government,” Ward said. “If you take that $300 million and divide it among 50 states and then among all the schools within those 50 states, you’re looking at only a couple thousand dollars per school.”

Ward said the trio of Tennessee students got the chance to meet Senator Lamar Alexander and Congressman Jim Cooper at their Washington offices. During the visit, Ward said his group presented Sen. Alexander with the Stand for Music Award for his role in the passage of the ESSA.

“People might not know this, but Senator Alexander is a classically trained pianist,” Ward said. “Music is extremely important to him, and we’re blessed as Tennesseans to have him and his connections.”

During his time in Washington, Ward was also able to argue against the McSally Amendment, which had been approved by the U.S. House shortly before his visit. A U.S. Representative from Arizona, McSally introduced an amendment to the defense spending bill to remove $430 million in funding for military bands to eliminate their performing at concerts, parades, dinners and other public events. The amendment passed the House of Representatives on a voice vote and was on its way to the Senate at the time of Ward’s visit.

Ward said that, although he does not have a military background, military music has played an important role in his life and the lives of many throughout the nation’s history.

“I still remember when an army band chorus visited my hometown during my childhood and how proud their performance made me feel as an American,” Ward said. “We have so many disagreements these days, but military music performances can still remind us that we’re all Americans and we’re all proud to be a part of the same country.”

Shortly after Ward’s visit, the U.S. Senate Democrats filibustered the House version of the Defense Appropriations Bill, in which the McSally Amendment was included, for Fiscal Year 2017. Although the amendment is not defeated, any decision on its fate has been temporarily shelved.

For Ward, the trip to Washington served a number of purposes. Besides boosting the resume of an aspiring music teacher, he said it also opened his eyes to the world of politics and showed him that the fight for music education is never-ending and that he and other politically active citizens can make their voices heard.

“I want to be a teacher and that’s what I’m training to be, but I want to make sure that I’m also doing things outside of the classroom,” Ward said. “Now that I’ve been to Washington, I’ve really become inspired by what I saw and I want to fight that fight.”