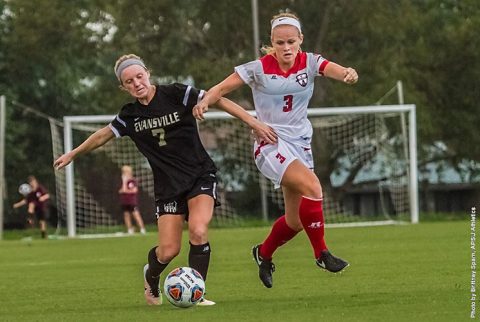 With the score level at 3-3, Robertson received a pass from Renee Semaan [2] on a breakaway.

The Ashland City, Tennessee, native took a couple touches before firing a low shot into the left corner, capping off a thrilling offensive showcase. Entering Friday, only four players in the nation had recorded 10 or more goals in 2016, with Robertson now in elite company.

Austin Peay (7-4, 2-0 OVC) opened the scoring following a fast-paced attack to begin the match. Both of APSU’s first two goals came off crosses, with the tandem of Robertson and Fabbro working to perfection. In the eighth minute, Fabbro delivered the assist with Robertson finishing from close range. Three minutes later, Robertson returned the favor to give the senior her third goal of 2016.

After a 2-0 halftime lead, the Govs stayed aggressive early in the second half. The aggressiveness led to a red card issued to UT Martin’s Maggie Burkett, who was previously shown a yellow in the first half. This helped Austin Peay score its third goal of the night – a strike by Semaan following a deflection in the 51st minute.

But despite being down to 10 players on the pitch, the Skyhawks (3-8, 0-3 OVC) created opportunities to eventually level the score. In the 63rd minute, Amy McGivern scored off a quick pass from Saphyra Coombs-James, then Danae Kaldaridou closed the gap on an unassisted goal. Lastly, in the 78th minute, McGivern struck once more with a shot from just outside the box, evening the score at 3-3 before Robertson’s game-winner.

APSU’s three goal scorers combined to total 12 of the team’s 18 shots in the match. In goal, junior Lindsey Todd [4] was awarded the victory, improving her undefeated record to 5-0-0.