The Park & Ride opened Monday, and McMillan joined with John Schroer, commissioner of the Tennessee Department of Transportation, and Regional Transit Authority CEO Steve Bland on Tuesday for a grand opening ceremony. 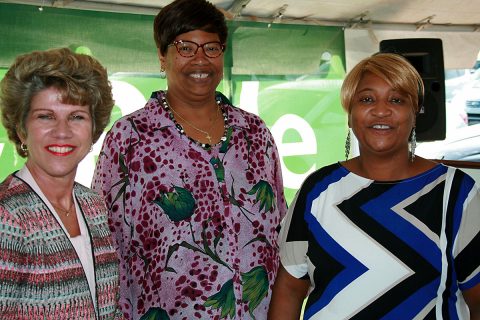 Clarksville Mayor Kim McMillan greets Angela Moore and Monalisa Barker, both of Clarksville, at the grand opening ceremony for the new Park & Ride at Exit 11. Moore and Barker ride the RTA’s 94X Express bus to and from work and say the service eliminates the stress and expense of driving and parking in Nashville.

McMillan, who also serves as board chairman of RTA, said the City of Clarksville is excited about the bigger Park & Ride lot, which is well-lighted, safer and more comfortable for local residents to use.

“This is for you,” McMillan said to a group of commuters who took in the ceremony after filing off the big Grey Line bus. “Thanks for sticking with us, as we worked to get this Express service off the ground.”

Vivian Kaaihue and Annick Iaquinta, both of Clarksville, said they were impressed with the new lot and pleased the City of Clarksville, the state and RTA had worked together to provide a new and improved facility. Both said they had been commuting to state jobs in Nashville for years, and really liked the convenience and cost savings of taking the bus to work.

“The bus is comfortable, and you can get a little extra sleep in the mornings if you want,” Kaaihue said. “You can read, watch TV or use the Internet, or you can just be friendly and socialize a little bit.” 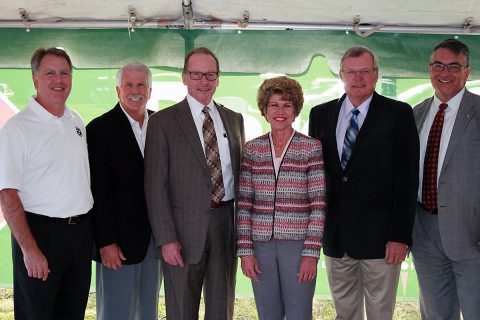 Monalisa Barker said she was “Clarksville born and raised,” and also had been commuting to her job at state Department of Human Services for years. “I’m sold on the 94X Clarksville Express service,” she said. “I’m saving more than the $1,100 a year I used to pay to ride a van service.”

The state and RTA have worked together to create the “Relax and Ride” program, which allows state workers to commute free of charge.

“We just saw 50 people get off one of the buses,” Schroer said. “That’s 50 cars not on the road. That means less congestion, less wear and tear on the roads and less pollution.”

The new park and ride was constructed on an undeveloped lot off of State Route 76 just east of the Exit 11 interchange. TDOT purchased the land and paid for construction of the lot, which has more than 250 parking spaces, covered shelters, and a dedicated turning area for buses.

“We need more Park & Rides,” Schroer said. “They are a lot less expensive than adding lanes to interstates or building new roads. We need more people to use the buses.”

Schroer added that TDOT can’t expand the roads fast enough to keep up rapidly growing Middle Tennessee. “Other modes like these buses are necessary. We have to look at all the options.”

The new lot replaces the Rossview Road Park & Ride lot in the median of I-24 at Exit 8, which closed at the end of the day on October 7th. The Rossview Road lot proved to be too small to handle the increased demand for parking spaces. On some days more than 140 cars were parked there, with vehicles spilling onto undesignated paved and unpaved areas of the property.

“We won’t miss the crowded conditions or the dust and dirt over there at Exit 8,” Iaquinta said. “This is really nice, and should make more people take advantage of the service.”

In addition to the new lot, a fourth RTA round-trip to and from Nashville has been added. Customers catching a Route 94X bus at Music City Central in Nashville now board at Bay 13 on the lower level.