Clarksville, TN – With another game-winning goal on Sunday, October 23rd, versus Jacksonville State, in a 1-0 victory at Morgan Brothers Field, Austin Peay State University’s Kirstin Robertson continues to build a résumé this season that could lead to her becoming the second Governor to earn the Ohio Valley Conference Player of the Year honors.

Tatiana Ariza is currently the only Austin Peay player to earn the league’s top honor, that coming back during the 2012 season, but Robertson, a 5-4, junior forward/midfielder from Ashland City, TN, may join her after coming off a sophomore season that saw her limited to just 13 matches after suffering several injuries in 2015. 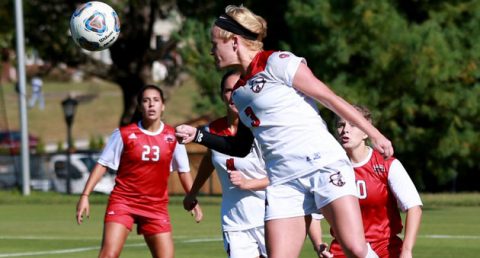 But this year, Robertson has made the most of her 17 starts in 18 overall matches with a team and OVC co-leading 11 goals on 21 total shots on goal – a success rate of 52.4.

Southeast Missouri’s Natasha Minor also has 11 goals this season, but has taken six most shot on game to make her total.

No other player in the OVC has most than eight goals, with one regular-season match to play.

But while Robertson and Minor are tied for the lead in the conference in goals, Robertson has five assists to go along with her 11 goals, compared to just two for Minor, which also gives Robertson the overall conference lead in total points over Minor, 27-24. 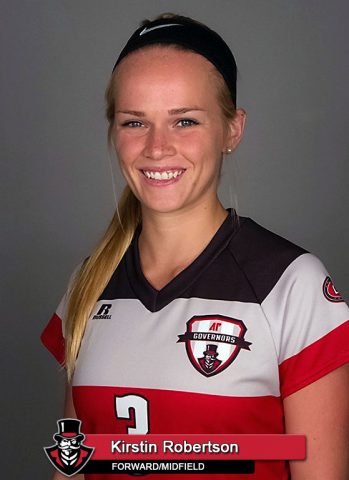 Her 27 points are also nine points ahead of the OVC’s third-place point scorer, Harriet Withers of Murray State.

Robertson also leads the conference in game-winning goals (6), points per game (1.50) and tying for the OVC lead in goals per game (.611 per game).

She has also been honored by the OVC three times this season as the league’s Player of the Week, the most in the conference, with only Eastern Kentucky’s Jordan Foster being the only other OVC player with multiple POW selections this season.

Another advantage that may come into play for Robertson is the fact she has help lock up a spot in the conferences postseason tournament, while SEMO has been eliminated from making the postseason, with SEMO picked to finish second in the pre-season poll – with Austin Peay picked to just miss out on the post season, with a tie-for-seventh place pick to finish in the same poll.

Whether Robertson wins the OVC Player of the Year honor or not this season, she has put together one of the best seasons in school history and one that will be remembered for a long time by Govs fans.