Nashville, TN – This week the Tennessee Titans (3-4) reach the midway point of the regular season, as they host the AFC South rival Jacksonville Jaguars (2-4) in a nationally televised Thursday night game.

NFL Network will broadcast the game to a national audience. The telecast also can be seen locally in Nashville on WTVF NewsChannel 5. Play-by-play announcer Jim Nantz and analyst Phil Simms will call the action, and Tracy Wolfson will report from the sidelines. 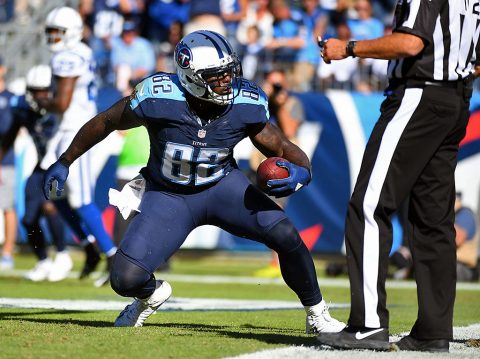 Additionally, Westwood One Sports will broadcast the game to a national audience. Play-by-play announcer Ian Eagle and analyst Mike Mayock will have the call.

The Titans have only four days to prepare for another division foe following a 34-26 loss at home last Sunday at the hands of the Indianapolis Colts. They scored 10 points in the fourth quarter to take a lead against the Colts, but their hopes of a third consecutive win were dashed when the Colts scored 14 points in the final two minutes.

Titans quarterback Marcus Mariota completed 22 of 37 passes for 232 yards with two touchdowns and no interceptions in the defeat. His two touchdown passes went to left tackle Taylor Lewan and tight end Delanie Walker.

In the last three weeks, Mariota’s eight touchdown passes are tied with Tom Brady and Matthew Stafford for the highest total in the NFL. 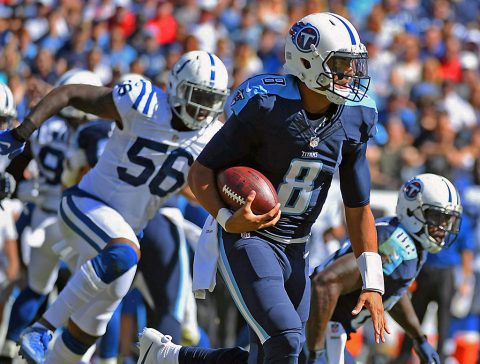 Tennessee Titans quarterback Marcus Mariota (8) runs for a first down in the first half against the Tennessee Titans at Nissan Stadium. The Colts won 34-26. (Christopher Hanewinckel-USA TODAY Sports)

During that same stretch, Mariota’s 113.1 passer rating ranks fifth, and he has an additional 138 yards and a touchdown rushing.

Against the Colts, running back DeMarco Murray produced his third 100-yard rushing game of 2016, totaling a game-high 107 yards and a touchdown on 25 carries.

Murray, who has 633 rushing yards and 192 receiving yards in his first season in Tennessee, spearheads the NFL’s third-ranked rushing attack. Individually, he is third in the league in both rushing yards and scrimmage yards.

The Titans defense ranks 10th in the NFL through the games of October 23rd. They are sixth against the run (87.4 yards allowed per game) and 18th against the pass (250.6).

Under head coach Gus Bradley, who is in his fourth season in Jacksonville, the Jaguars won two consecutive games before falling at home last week to the Oakland Raiders. Quarterback Blake Bortles passed for 246 yards and a touchdown against the Raiders but was victimized twice by interceptions in a 34-16 loss.

In 2015, Bortles set a franchise record with 35 touchdown passes. He became the third quarterback in NFL history to pass for 35 touchdowns and 4,000 yards (4,428) in his second season, joining Kurt Warner and Dan Marino. 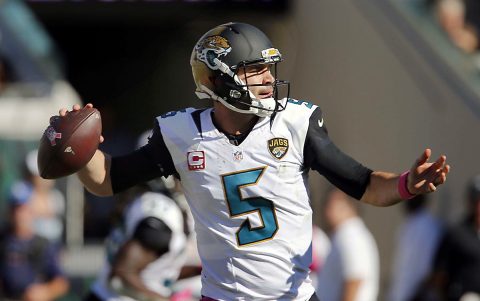 Jacksonville Jaguars quarterback Blake Bortles (5) drops to throw a pass during the second half of a football game against the Oakland Raiders at EverBank Field. The Raiders won 33-16. (Reinhold Matay-USA TODAY Sports)

The Jaguars began the season with losses to the Green Bay Packers, San Diego Chargers and Baltimore Ravens. In Week 4, they beat the Colts in London, and after a Week 5 bye, they picked up a road win against the Chicago Bears.

For more information on Nurses for Newborns, visit www.nfnf.org [2]