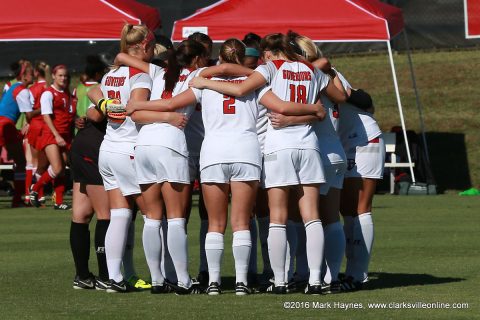 The Governors (10-6-3, 5-2-3 OVC) ended the regular season unbeaten in their last three matches, including holding opponents scoreless in all three.

APSU has seen its defense step up in these low-scoring contests, led by the play of junior Lindsey Todd [1] in goal.

Todd has enjoyed a breakout campaign in her third season in Clarksville, compiling an 8-2-3 record with six shutouts.

In addition, Todd ranks second in the OVC in goals against average (0.74).

The APSU back line, led by senior center back Mary Ruth Locastro [2], has been one of the strongest units in the conference, with only six goals allowed in the OVC slate.

Offensively, the Govs offense continues to go through forwards Kirstin Robertson [3] and Gina Fabbro [4]. Following a four point weekend which resulted in wins over Belmont and Jacksonville State, Robertson came inches away from scoring against the eventual regular season champions Murray State, hitting the post on a shot attempt in the first half.

Meanwhile, Fabbro has been a do-it-all attacking player for the Govs, including serving as the team’s corner kick specialist.

SIUE (8-7-3, 6-3-1 OVC) enters the postseason following a 5-1 win over Eastern Illinois, which stopped a string of back-to-back 1-0 losses. This season, the Cougars are 6-0-2 on their home pitch at Ralph Korte Stadium.

On October 14th, SIUE earned a 1-0 victory over Austin Peay in Edwardsville, IL. Courtney Benning scored the game’s lone goal, a header in the 28th minute.

The last time the Governors faced SIUE in postseason play was 2012, resulting in a 1-0 APSU win. Joceline Quiceno scored in the 84th minute, helping the Govs reach the OVC Championship match.

With her six shutouts in 2016, Todd has tied Sarah Broadbent for third-most in a single season.

Two players on Austin Peay’s roster have experienced the thrill of playing in the OVC Tournament – Fabbro and Locastro, both as freshmen in 2013.

Be sure to follow all the Austin Peay soccer action at www.LetsGoPeay.com [5] and the official Facebook page of Austin Peay Athletics. In addition, live play-by-play coverage can be found on Twitter (@AustinPeaySocr), while Sunday’s match can be streamed at www.OVCDigitalNetwork.com [6]