Slay was named the league’s Offensive Player of the Week for the second time this season. Stucker earned her third consecutive Setter of the Week citation and fourth in 2016. 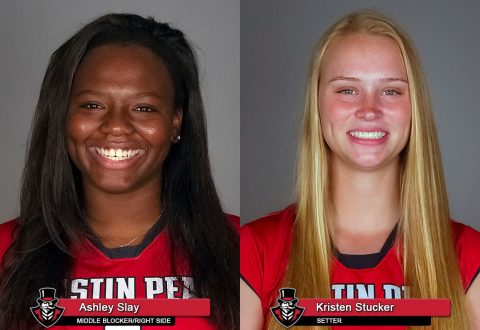 Nashville-native Slay had an impressive week, hitting over .400 in all three matches. She opened the week with seven kills (3.50 kps) while playing only two sets against nonconference foe Alabama A&M, Tuesday, posting a .417 attack percentage in the match.

Returning to conference action, Slay posted 16 kills (5.33 kps) and a .423 attack percentage at UT Martin, Friday, chipping in an ace and three blocks for 19 points. She finished the week with her second 22-kill (4.40 kps) performance this season, accomplishing the feat in just 38 attempts (.447 attack percentage) at Southeast Missouri, Saturday.

Stucker, of Johnston, Iowa, closed her week with a 63-assist (12.6 aps) performance at Southeast Missouri, Saturday, which was one assist shy of the Austin Peay record in the current scoring format. She also had four kills, three blocks and 13 digs in the five-set victory.

The two honors are the eighth and ninth received by the Governors this season, setting a school record. The previous mark was eight weekly awards set by the 2010 squad. In addition, Stucker’s four individual weekly honors ties the program record held by APSU Athletics Hall of Famer Stephanie Champine.

Austin Peay begins a four-match homestand when it hosts Murray State in a 6:00pm, Wednesday contest. The fourth contest in the Heritage Bank Battle of the Border between Austin Peay and Murray State, the game pits an 11-1 Racers squad against the 10-2 Governors.