Why STAT Class is Important

Clarksville, TN – For the past several years, Misty Mackens and the Clarksville Police Department’s Traffic Unit, with the assistance of Stephanie Rutherford and the Citizens Police Academy Alumni (CPAA), have hosted Student Traffic Awareness Training (STAT) classes for teens between the ages of 15 and 19.

There are usually three classes per year in the months of May, August, and October. The classes are held on Saturdays from 9:00am to 1:00pm and the classes are free to attend.

Did You Know? (Teen driver statistics and information): 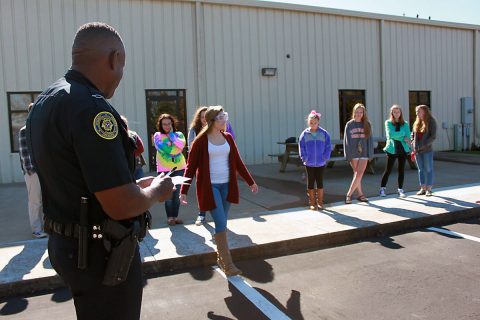 According to the AAA Foundation for Traffic Safety, study analyzed data of police-reported crashes of drivers aged 15-19, from 1994-2013 and found that:

Another AAA Foundation article states that the top three issues with teen drivers are poor visual scanning (results of lack of experience behind the wheel), speeding, and the many distractions they are subject to, which include but are not limited to cell phones, drugs and alcohol, and teens driving with teen passengers.

Motor vehicle crashes remain the leading cause of death for drivers aged 15-19.

Every class has been special to the teens that attended; however, the 2016 classes were a little different. In the classes this year, Stephanie Rutherford shared the stage with the man responsible for the drunk driving crash in 2011 that left her daughter paralyzed.

She and Kristopher Colbert, the at-fault driver in the crash, spoke to the teen drivers about what they both experienced after the tragedy and what has occurred since then.

After classroom instruction, the students drive golf carts through an obstacle course with drunk goggles and while texting.

These activities give the students an idea of what it’s like to function with distractions while under the supervision of CPD Officers and while in a safe training environment.

After attending this class, our hopes are that the students have a better idea of what the hazards are on our roadways and can make safe and focused decisions while driving.

CPD STAT Class may be one of the most important classes your teen will ever attend.

How do I sign my teen up for STAT Class?

Currently, the 2017 dates are not posted. The dates are expected to be set by March 2017. After the dates are set, applications will be available at Clarksville Police Headquarters, 135 Commerce Street.

You can also visit the following link– http://www.cityofclarksville.com/index.aspx?page=390