HomeEvents“Anything Goes” to be presented by APSU’s Department of Theatre and Dance...
Events 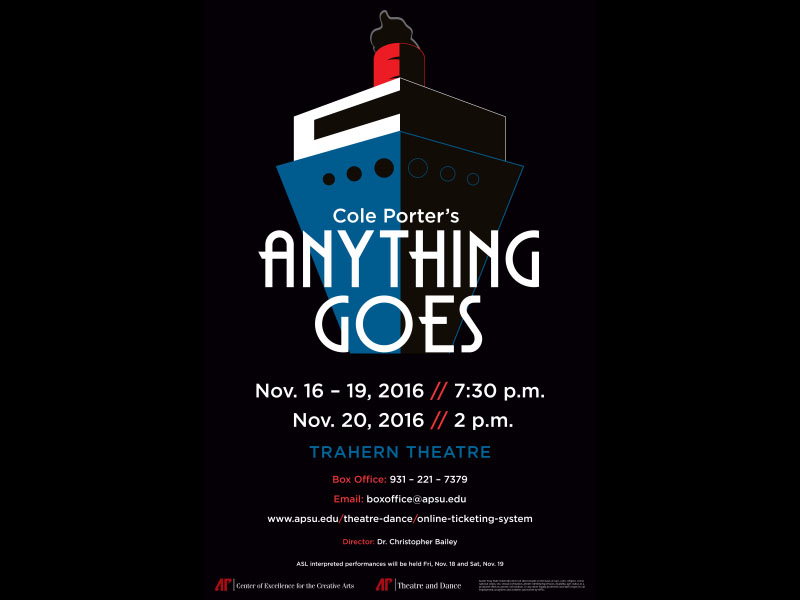 Clarksville, TN – It is not exactly like the old joke about three opposite personalities that all walk into a bar, but anything – and everything – goes when a brassy nightclub singer, a starry-eyed stowaway and a wanted man all find their way onto a transatlantic luxury liner during the Austin Peay State University’s Department of Theatre and Dance’s presentation of “Anything Goes” this November 16th-20th. 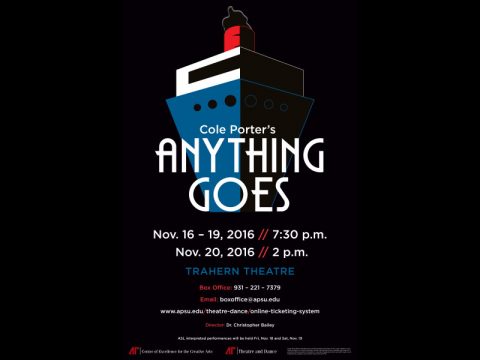 The curtain rises at 7:30pm for performances on November 16th-19th, with an additional showing November 20th at 2:00pm. Admission for all performances is $10.00 for seniors, children, military and students and $15.00 for the general public.

“Anything Goes” is a musical with music and lyrics by Cole Porter, based off of a book by Guy Bolton and P.G. Wodehouse, heavily revised by the team of Howard Lindsay and Russel Crouse. The play is set aboard the ocean liner S.S. American, where nightclub singer Reno Sweeney is en route from New York to England.

Meanwhile, Sweeny’s friend, Billy Crocker has stowed away to be near his love, Hope Harcourt. When Hope reveals she is already engaged to the wealthy Sir Evelyn Oakleigh, the love-struck yet determined Billy works to win Hope’s affections with the help of a gangster on the run, Moonface Martin and his partner Bonnie.

First performed in 1934 at the Alvin Theater on Broadway, the show features classic songs such as “You’re the Top,” “I Get a Kick Out of You” and “It’s De-Lovely.”

“If I had to describe this production in one word, I’d say that it’s just ‘fun’,” Dr. Christopher Bailey, Austin Peay associate professor of musical theatre and voice, said. “There are thieves, fools, scoundrels, lovers…there’s tap dancing, there’s jazz and everything is scored by a wonderful orchestra. The stakes aren’t high in this production, and the audience is able to just enjoy a classic, golden age musical.”

Bailey said “Anything Goes” was partially chosen for the department’s second Fall 2016 production in an effort to give students an education on the history of musical theatre.

“A lot of our students now are very familiar with productions like ‘Wicked’ or ‘Shrek,’ but those shows did not happen in a vacuum,” Bailey, who is directing the production, said. “We strive to be a professional theatre, but we’re also an educational theatre first and foremost, so a production like ‘Anything Goes’ that debuted in the 1930s is a way to really make our students aware of the tradition of American musical theatre.”

For the production’s Friday, November 18th, and Saturday, November 19th, performances, the Department of Theatre and Dance has partnered with the Austin Peay Office of Disability Services to provide a team of five American Sign Language interpreters who will translate the performance for the hearing-impaired.

“The deaf community is experiencing a surge right now in the popularity of musical theatre and we want to answer the call and be a part of that here at Austin Peay,” Bailey said.

Tickets can also be purchased at www.apsu.edu/theatre-dance/online-ticketing/system