Home Game against Arkansas State next for APSU Women’s Basketball

Clarksville, TN – Coming off its first win of 2016, Austin Peay State University women’s basketball team seeks to ride that momentum into its home contest against Arkansas State, 7:00pm, Wednesday, in the Dunn Center. 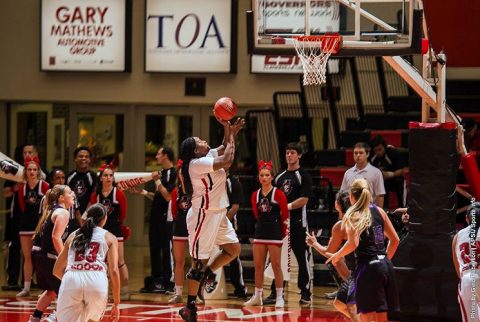 The Governors (1-1) are coming off a 76-57 victory over Christian Brothers, Sunday, which featured a career-best 23-point performance by junior center Brianne Alexander [1].

The Smyrna, Tennessee, product scored 19 of her points in the second half as Austin Peay mounted a second-half comeback. Highlighting Alexander’s day was an 11-of-16 mark at the free throw line, with her 16 attempts one shy of the single-game program record.

In the 27-point third quarter, the lineup of Alexander, Rates, Baker, freshman Nieja Crawford [6] and junior Bri Williams [7] were most effective, outscoring the Lady Bucs 16-6 to close the period.

The Red Wolves are in the midst of a rebuilding year, having lost all five of their starters from a season ago. Arkansas State looks to reestablish its foundation following the loss of 86 percent of its offense, and will suit up seven freshmen when the team travels to Clarksville.

Arkansas State opened the season with a 76-34 loss at Oklahoma State, with just 15 of those points occurring in the second half. Starr Taylor and Dominique Oliver each had seven points to lead ASU.

Head coach Brian Boyer begins his 18th season at the helm, having spent his entire coaching career at Arkansas State.

Last Time Against the Red Wolves

Searching for more
After falling to Eastern Kentucky in the opening round of the OVC Tournament, David Midlick [5] returns for his second head coaching season in Clarksville, looking to build on an eight-win conference season.

Defend the Dunn
In 2015-16, Austin Peay compiled a 9-3 record on its home court, with all but one win on the season occurring in the Dunn Center. Seven of those victories came in Ohio Valley Conference play, including three consecutive home wins to conclude the season. This year, the Govs have an increased home schedule with 15 games (four-straight to open).

Banks
The senior center posted a .598 field goal percentage in 2015-16, the highest mark in the OVC and fifth nationally. Banks returns as APSU’s leading scorer at 12 points per game, despite averaging just 15 minutes. She also grabbed 4.2 rebounds per contest a season ago.

Rates climbing the charts
The senior forward continues to climb the career blocks rankings, entering Wednesday with 83 which is 10 away from tying Sonja Cox for fifth all-time.

Baker for three
Falon Baker [4] returned from injury last season and lit it up front deep, hitting 48 threes with a .375 percentage. In 2016, she continues to be a weapon from behind the arch, with eight threes thus far.

Newbies
Midlick has brought in five newcomers to join the Governors – two junior college transfers (Ant’Treasia Patton [10] and Bri Williams [7]) and three freshmen (Nieja Crawford [6], Arielle Gonzalez-Varner [11] and Shelbe Piggie [12]). Williams and Piggie, along with Rivers, are expected to compete for the starting point guard spot.

Be sure to follow all the Austin Peay women’s basketball action at www.LetsGoPeay.com [13] and the official Facebook page of Austin Peay Athletics. In addition, live play-by-play coverage can be found on Twitter (@AustinPeayWBB) and live stats will be available at www.PeayStats.com [14]

Wednesday’s game can also be streamed for free at www.OVCDigitalNetwork.com [15]