The Governors (2-1) have taken advantage of the matchups on their home floor, and are now 11-4 in Clarksville under head coach David Midlick. A Govs win on Saturday will be APSU’s best four-game start to a season since 2002. 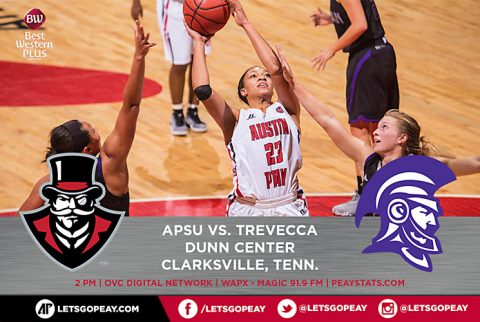 Austin Peay is coming off back-to-back victories, first a 76-57 victory over Christian Brothers, Sunday, before earning a 62-55 nod against Arkansas State, Sunday.

The latter game featured a strong defensive performance by the Govs, totaling 10 blocked shots – the most since last season’s Trevecca contest – and held the Red Wolves to 29 percent from the field.

Nine different Governors scored on Wednesday, led by three in double figures – junior Bri Williams (11 points), redshirt sophomore Falon Baker (11) and senior Tearra Banks (10). It was a career day for the point guard, Williams, who posted a line of 11 points (7-of-10 FTs), six rebounds, two assists, one block and one steal.

The Trojans have opened the regular season at 1-2, coming off a 52-47 win over Lane College, Thursday. Megan Kilburn totaled a double-double in the contest (13 points, 10 rebounds), while Sarah Raby also finished in double figures with 12 points.

Last Time Against the Trojans

Be sure to follow all the Austin Peay women’s basketball action at www.LetsGoPeay.com and the official Facebook page of Austin Peay Athletics. In addition, live play-by-play coverage can be found on Twitter (@AustinPeayWBB) and live stats will be available at www.PeayStats.com

Saturday’s game can also be streamed for free at www.OVCDigitalNetwork.com