Nashville, TN – This week’s game will mark the 45th all-time contest between the Tennessee Titans and the Indianapolis Colts. The Colts lead the series 30-14. 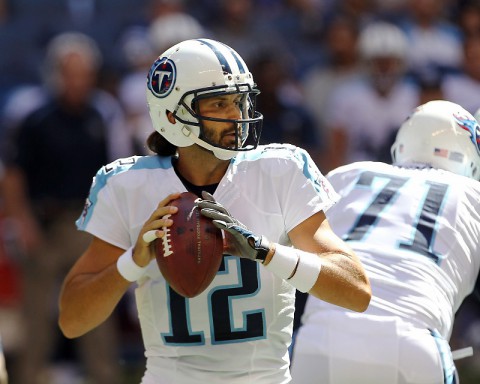 The last time the Titans and Colts met at Lucas Oil Stadium was the 2015 finale (played on January 3rd, 2016), when Colts backup quarterbacks Josh Freeman and Ryan Lindley got the best of the Titans and quarterbacks Zach Mettenberger and Alex Tanney.

In the initial meeting of 2016, played at Nissan Stadium on October 23rd, the Colts won a tightly-contested battle by a final score of 34-26. The Titans scored 10 points in the fourth quarter to grab the lead, but their hopes were dashed when the Colts scored 14 points in the final two minutes.

2014 Week 4 • Sept. 28, 2014 • Titans 17 at COLTS 41
Andrew Luck passes for 393 yards and four touchdowns … Two Colts receivers go over 100 yards — Reggie Wayne (119) and T.Y. Hilton (105) … The Colts force three turnovers, including two interceptions by safety Mike Adams … Charlie Whitehurst starts at quarterback for the Titans in place of Jake Locker (wrist) and goes 12-of-23 for 177 yards, an interception and a touchdown pass to Delanie Walker.

2015 Week 3 • Sept. 27, 2015 • COLTS 35 at Titans 33
The Colts erase a 27-14 deficit in the fourth quarter after losing a 14-0 lead earlier … Titans fullback Jalston Fowler scores a touchdown with 47 seconds remaining but is stopped on the two-point conversion attempt that would have tied the score … Marcus Mariota passes for franchise rookie record 367 yards … Colts safety Dwight Lowery records two interceptions, including one for a touchdown.

2015 Week 17 • Jan. 3, 2016 • Titans 24 at COLTS 30
In a battle of backup quarterbacks, Zach Mettenberger (five-of-13 for 38 yards) starts for the Titans and is replaced by Alex Tanney (10-of-14 for 99 yards) due to injury … Recently-signed quarterbacks Josh Freeman and Ryan Lindley play for the Colts, and each throw a touchdown pass, including a 57-yard strike from Freeman to tight end Coby Fleener … Colts linebacker Jerrell Freeman returns an interception 23 yards for a touchdown … The Titans score touchdowns on rushes by David Cobb and Mettenberger and a reception by Dorial Green-Beckham … Adam Vinatieri boots three field goals for the Colts.

2016 Week 7 • Oct. 3, 2016 • COLTS 34 at Titans 26
Andrew Luck’s third touchdown pass of the day, a seven-yard strike to tight end Jack Doyle, gives the Colts the lead with 1:55 remaining … On the ensuring Titans drive, linebacker Robert Mathis adds to the Colts late lead with a 14-yard fumble return for a touchdown…Luck passess for 353 yards, including 133 yards to receiver T.Y. Hilton … Titans quarterback Marcus Mariota throws for two touchdowns, including a 10-yarder to left tackle Taylor Lewan in the first quarter…DeMarco Murray rushes for 107 yards for the Titans.