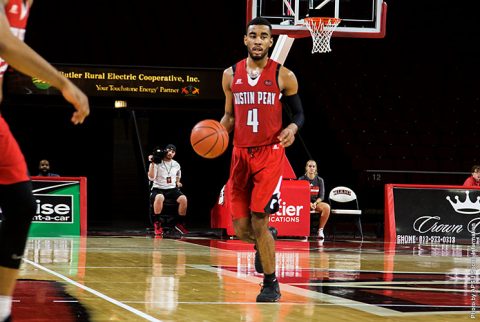 Fort Wayne has been stout at home the last two seasons, going 18-1 at home with a win over then third-ranked Indiana, November 22nd.

John Murry [1] has stepped up over the last two contests, boosting his scoring average by nearly three points to 15.4 ppg; he’s hit 62.1 percent (18-for-29) from the floor during that stretch, and scored a career-high 25 points in his last outing against the Mastodons.

Having already seen Fort Wayne once in 2016-17, the Govs are familiar with the fast-paced style Jon Coffman’s Mastodons have come to employ; Fort Wayne enjoyed an 18-2 advantage in transition points in the last meeting, but just two of the Mastodons final 39 points came on the break.

Mo Evans (13 points, 11 assists) had the most assists by an APSU opponent since Brent Arrington (January 27th, 2016) in this season’s previous meeting and is the engine behind a high-scoring (87.0 ppg) offense.

Despite a game-high 23 points from Murry, the Governors fell 99-62 in Fayetteville, December 3rd. Murry, who did not reach 20 points in each of his first 31 games, has now done so in each of the last two contests; he hit 9-of-16 from the floor against the Razorbacks. The Razorbacks changed the game near the rim, blocking 11 shots (first double-digit shot blocking performance by an APSU opponent since February 15th, 2011 against Jacksonville State) and out rebounding the Govs 47-31.

Last Time Out Against Fort Wayne

Milestone Watch
Dave Loos needs four wins for 500 as a collegiate head coach, while Robinson is three made three-pointers from breaking into APSU’s top-10 all-time.

Mr. Robinson’s Neighborhood
Only 10 Division I players are averaging at least 21.0 points and 4.5 assists per contest; one is Josh Robinson [2], who checks in at 21.5 ppg and 4.6 apg heading into Saturday’s contest.

Double Trouble
When Austin Peay stormed back from 17 down to nearly equalize against Fort Wayne, they did so on the strength of strong second-half performances from Robinson and Murry. Robinson scored 26 of his game-high 33 points in the second half, while 21 of Murry’s career-high 25 came during the final period. Further research was unable to find the last instance when two Austin Peay teammates scored 20 or more points in a half in the same game.

To The Summit
The Govs seek their first win against a Summit League foe since sweeping a home-and-home series against IUPUI in 2000.

Hang On
The Govs have a turnover margin of plus-9.8 in wins and minus-3.8 in losses.

Check back at www.LetsGoPeay.com [4] and on Austin Peay’s Official Athletics Facebook page often for up-to-date news about all Governor athletics, as well as the Governor men’s basketball Twitter page (@AustinPeayMBB).

Live stats will be available during the game at LetsGoPeay.com, and all home games and Ohio Valley Conference games can be viewed on www.ovcdigitalnetwork.com [5]. Postgame video interviews and other videos from around APSU Athletics can be found on our YouTube page (www.youtube.com/letsgopeay [6]).