The 13 Govs that picked up their degrees were spread out over seven teams; with football leading the way with five, followed by baseball (3) and volleyball, women’s soccer, women’s tennis and women’s golf all having one graduate. 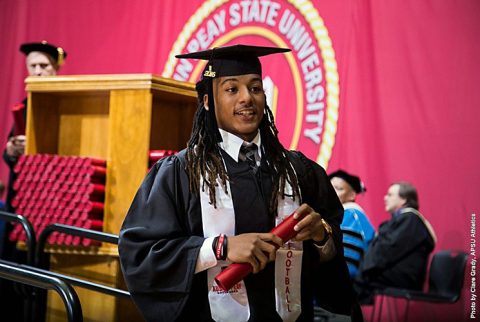 The APSU athletics department also showed improvement in its federal graduation rate (FGR), as 63 percent of students who entered the university in 2009 graduated within six years of their initial enrollment.

Of the 13, four will continue their education as they also continue their respective athletic careers for the Govs, with pitchers Levi Primasing and Jordan Witcig still playing baseball, Kelsey Schutt playing golf and Jacey Scott currently playing basketball for the women’s basketball team.

Fabbro was a four-year starter and two time All-Ohio Valley Conference Second-Team selection for APSU, who finished with 18 career goals – fourth-most in school history – and 45 total points, also the fourth-most in the program’s history. She is also ranked in the Top-10 all-time in assists.

Ebright was a four-year starter for the Govs after sitting out her true freshman year receiving a red-shirt, and helped lead the Govs to a 24-win season this fall – the fourth-most in a single season in school history, while the win total was the most of all the NCAA Division I teams in the state of Tennessee.

In her four seasons, Ebright recorded 773 kills and 928 digs in her career; while being named to the All-OVC All-Newcomers team in her first season.