Nashville, TN – This week the Tennessee Titans (8-6) travel to Jacksonville for a Christmas Eve showdown with the division rival Jacksonville Jaguars (2-12). Kickoff at EverBank Field (capacity 66,851) is scheduled for noon CST on Saturday, December 24th.

This week’s game will be televised regionally on CBS, including Nashville affiliate WTVF NewsChannel 5. Play-by-play announcer Andrew Catalon will call the action alongside analysts Steve Tasker and Steve Beuerlein. Chris Fischer will report from the sidelines. 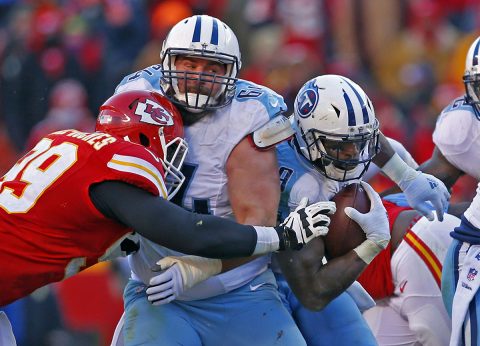 With two games remaining in the regular season, the Titans, who have won three consecutive games and seven of their last 10 contests, enter the week tied with the 8-6 Houston Texans for first place in the AFC South. The Indianapolis Colts are 7-7, one game behind the co-leaders. This week the Colts visit the Oakland Raiders Saturday afternoon (3:05pm CST), and the Texans host the Cincinnati Bengals later that evening (7:25pm CST).

The Titans were able to maintain pace with the Texans in the division race thanks to last week’s dramatic 19-17 victory at the Kansas City Chiefs in the coldest game in franchise history (1 degree at kickoff). 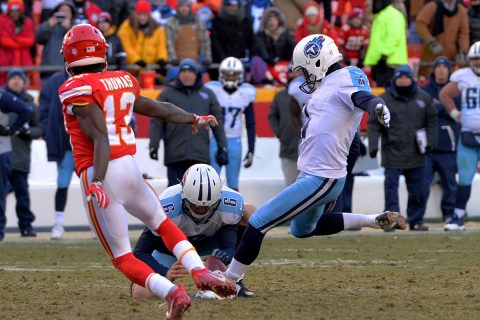 Ryan Succop drilled a 53-yard field goal as time expired to give the Titans the win. The kick tied for the second-longest game-winner in franchise history, equaling Rob Bironas’ 53-yard attempt at Houston on November 23rd, 2009 and behind only Bironas’ 60-yarder against Indianapolis on December 3rd, 2006. The 53-yarder at Kansas City gave Succop six career game-winning field goals but was his first in a Titans uniform.

The Titans defense gave up 17 points in the first half but shut out the Chiefs in the second half. The effort included a sack from outside linebacker Brian Orakpo (11th of 2016), an interception in the end zone from fifth-round rookie cornerback LeShaun Sims and a key goal-line stand in the second quarter.

Quarterback Marcus Mariota was 19-of-33 passing for 241 yards in the contest. After the Titans trailed 17-7, he led the team to scores on all three drives in the fourth quarter. In doing so, he recorded his fourth career fourth-quarter comeback as well as his fourth career game-winning drive.

Tennessee’s running back duo of DeMarco Murray and Derrick Henry came up big as well. Murray led the team with 89 rushing yards and 141 scrimmage yards, while Henry scored both of the team’s touchdowns. The Titans offense, which ranks eighth overall in the NFL (373.5 yards per game), is ranked third in the league in rushing at 144.7 yards per game.

The Jaguars will take the field on Christmas Eve under the direction of new interim head coach Doug Marrone. Following last week’s 21-20 loss at Houston, the team relieved Gus Bradley of his duties as head coach and named Marrone the interim head coach on Monday, December 19th. Bradley was in his fourth season on the Jacksonville sideline.

Marrone, a 24-year coaching veteran, originally joined the Jaguars as assistant head coach-offense/offensive line coach in 2015, following a two-year stint as the head coach for the Buffalo Bills (2013-14).

Jaguars quarterback Blake Bortles passed for 92 yards and rushed for a touchdown against the Texans. In 2015, Bortles set a franchise record with 35 touchdown passes and became the third quarterback in NFL history to pass for 35 touchdowns and 4,000 yards (4,428) in his second season, joining Kurt Warner and Dan Marino.