The game will be televised regionally on CBS, including Nashville affiliate WTVF NewsChannel 5. Play-by-play announcer Tom McCarthy will call the action alongside analyst Adam Archuleta.

Additionally, Sports USA will broadcast the Titans-Texans game to a national radio audience. Play-by-play announcer Eli Gold and analyst John Robinson will have the call.

Titans Look To Finish On A Winning Note

Last week the Titans traveled to the Jacksonville Jaguars, where their playoff hopes were dashed due to a 38-17 defeat. Jaguars quarterback Blake Bortles passed for 325 yards and a touchdown and added a touchdown catch to hand the Titans their only double-digit loss of the season.

The Titans’ loss, coupled with the Texans’ victory over the Cincinnati Bengals, eliminated the Titans from playoff contention and delivered a second consecutive division title to the Texans. While a win by the Titans this week would give the two clubs identical 9-7 records, the Texans would still win the division based on the divisional record tiebreaker. Entering the week, the Texans are 5-0 in the AFC South, while the Titans are 1-4.

At Jacksonville, Titans starting quarterback Marcus Mariota left the game in the third quarter with a fractured right fibula, which will require surgery to correct. Matt Cassel entered in relief and threw for 124 yards and a touchdown in the final 16 minutes of the contest. A 12-year veteran, Cassel is in his first season in Tennessee after starting 79 total games in previous stops at the New England Patriots, Kansas City Chiefs, Minnesota Vikings, Buffalo Bills and Dallas Cowboys.

He also ranks fourth in touchdowns (26), seventh in yards (3,426), ninth in yards per attempt (7.60) and second in touchdown-to-interception ratio (2.89) on the team’s single-season passing lists.

The Titans already have won five more games than they won in 2015 (3-13). One more win will put them in a tie for the biggest one-year turnaround in franchise history, equaling the six-win improvements of the 1967 and 1974 squads. A win additionally will put Mike Mularkey in a tie with Sid Gillman (1974) for the biggest win increase in team history by a head coach in his first full year in the role. 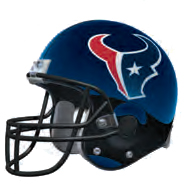 The Texans are locked in as the No. 4 seed in the AFC playoffs. They clinched their second straight division title last week under Bill O’Brien, who is completing his third campaign in Houston.

In last Saturday night’s 12-10 victory over the Bengals at NRG Stadium, Texans quarterback Tom Savage recorded his first career start and completed 18 of 29 passes for 176 yards. He did not commit a turnover. The Texans trailed 10-6 in the fourth quarter when Savage led the game-winning drive, which was capped by a 24-yard touchdown run by Alfred Blue.

Savage was selected by the Texans in the fourth round of the 2014 NFL Draft and appeared in only three career games prior to last week’s start. For the first 14 games of the 2016 campaign, he sat behind Brock Osweiler.