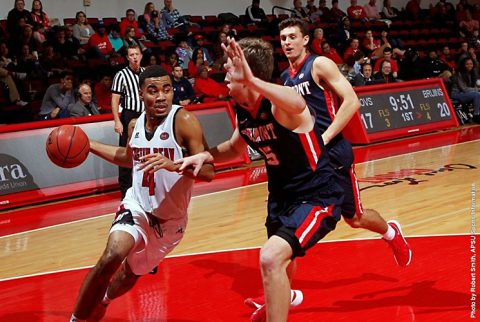 Austin Peay led for much of the first half on the strength of Kenny Jones [1]‘ inside presence and the outside shooting of Jared Savage [2] and Josh Robinson [3]; Jones posted 10 points and seven boards in the first half, while Robinson and Savage combined combined for half (16) of the Governors 32 first-half points.

But a late Belmont run and Governor scoring drought made it 40-32 at the break and the Bruins pushed that lead out to 13 early in the second half before the Governors began to chip away at it.

An 11-5 run midway through the half—thanks to seven points from Robinson—cut the deficit to five and a later 10-3 run cut it to four with under a minute to go.

After the teams traded points on an Austin Luke lay-up and free-throws from Jones, Belmont’s Evan Bradds missed the front end of a one-and-one opportunity and Robinson got a look at three-pointer that rolled off the rim.

Belmont’s Taylor Barnette, who led all scorers with 28 points, hit four free-throws to seal the game, the final two coming after a Robinson three-pointer—the final of points of his 27-point outing—with 1.8 seconds to go had cut the deficit to three.

“I thought we were better defensively, although we still had a couple of lapses that really hurt us. They were shooting 78 percent early in the second half, which really hurt us. But the effort was better; it was a winnable game.”

“I thought we moved the ball and a number of guys contribute, which was a good sign.”

“I think Belmont is a team we should out-rebound and they got a number of second-chance opportunities. We talked about that at halftime but weren’t able to conquer it.”

Up Next for the APSU Govs

Austin Peay takes its first road trip of the conference schedule next week, beginning with a Thursday, January 5th venture to Cookeville to take on Tennessee Tech.