Nashville, TN – A buck harvested in Sumner County during the recent muzzleloader season, has completed a step toward becoming a world record for a non-typical deer rack. 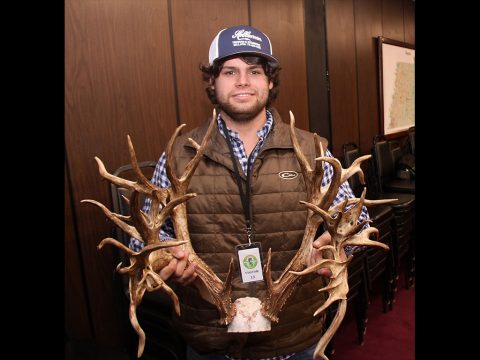 Stephen Tucker with the rack of 47-point buck harvested in Sumner County.

The deer rack scored 312 3/8 in the Boone and Crockett tabulation.

The tabulation was held after 60 days had passed since the original “wet” score indicated that the buck was a potential world record. As it stands, the score will break previous mark of 307 5/8 set by then 15-year old Tony Lovsteun in Albia, Iowa.

Tucker made his harvest from about 40 yards. It came on a land that his family has leased to farm for the past 40 years.

“I have truly been blessed and I am very thankful,” Tucker said after learning the rack’s score. “I have had a lot of phones calls and questions and have tried to be patient waiting through the process. I am very appreciative to my family, friends, and the TWRA, especially Capt. Dale Grandstaff, who has led me through the process. I believe he has been as excited about it as I have.” 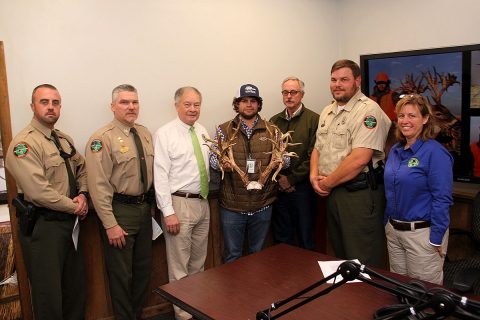 Stephen Tucker, holding rack, with TWRA Director Ed Carter (third from left), and officials scorers after the tabulation was conducted at the Nashville TWRA office.

The certification process will now await another step as a pending world record. Another panel of Boone and Crockett scorers will again take measurements at the awards banquet in 2019.