Fort Campbell, KY – The 101st Airborne Division (Air Assault) has opened a new chapter in its rendezvous with destiny. Maj. Gen. Gary J. Volesky, the 45th commanding general of the 101st, placed the division in the hands of Maj. Gen. Andrew P. Poppas, the incoming division commander, during a change of command ceremony January 19th, 2017.

“Our Army couldn’t have chosen a better leader to command this division two and a half years ago than Gary Volesky,” Townsend said. “During his watch, elements of the 101st have deployed to Afghanistan, Iraq, Syria, Turkey, Liberia and a whole list of other nations around the world in support of both combat and shaping operations for our nation.” 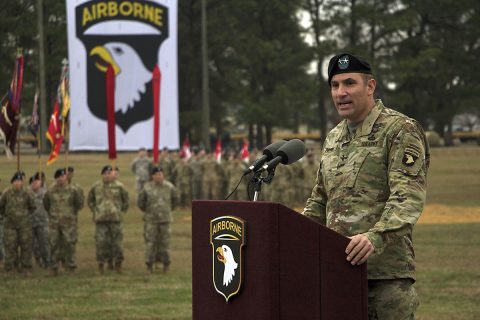 Volesky thanked the community and his family for their support during his command; and congratulated the thousands of Screaming Eagle Soldiers standing on the division parade field behind him.

“This team’s efforts and impact can easily be seen outside of Fort Campbell’s borders,” Volesky said during his farewell speech. “The Ebola virus contained in Liberia in only six months versus the 18 months originally predicted, or the Iraqi security forces seizing over 60 percent of the territory they had lost in only nine months and entering Mosul four months earlier than originally projected. Or seeing Fort Campbell Soldiers defending our freedom today in Afghanistan, Africa and Egypt.”

During Volesky’s command, the 101st also became the first Army division to complete the Multi-Component Unit transition, combining active-duty and Reservist soldiers as a singular unit to deploy in support of contingency operations around the world. These additional Soldiers from the Wisconsin and Utah National Guard played a major role in the division’s most recent deployment to Iraq in support of OIR, in Iraq.

“As we have seen over the past two years, when our nation needs it done, they call the 101,” Volesky said. “Whether in Liberia, Iraq, Afghanistan, Africa, Egypt or countries in between, the 101st continues to answer or nation’s call in defending our freedom.”

Volesky will soon be promoted to the rank of lieutenant general and take command of I Corps and Joint Base Lewis-McChord in Washington.

Poppas arrives to Fort Campbell from the Pentagon after completing his tour as the Director, Force Management, Office of the Deputy Chief of Staff, G3/5/7.

“It is truly a humbling experience to stand here today and assume command of this storied division,” Poppas said during the ceremony. “One whose reputation of combat prowess was born in the most extreme conditions of World War II and whose legacy of heroism continues on today with the warriors standing before you.”

Poppas has previously been assigned to the 101st and Fort Campbell where he commanded the 1st Brigade Combat Team “Bastogne,” and most recently served as the deputy commanding general for operations.

“To the warriors of the 101st,” Poppas said, turning toward the formation. “This is a period of historic change and uncertainty, and though the global situation continues to be unstable, our future is written … because out there is a foe, a belligerent, an adversary who is going to test America’s resolve, and it will be the Screaming Eagles who will answer the call. For this division exists to fight and I am honored to be provided the opportunity to join your ranks once again and fight by your side.”