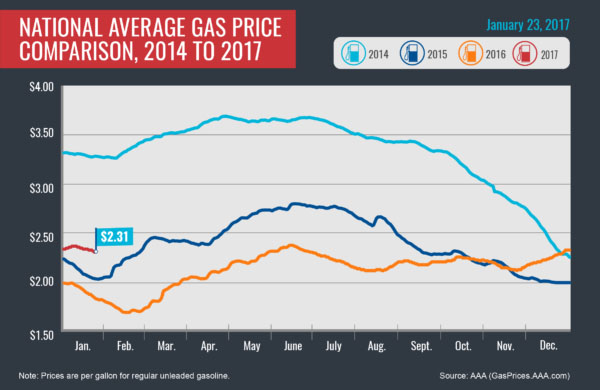 Despite this recent trend lower, retail averages are up by 46 cents per gallon as compared to one year ago. 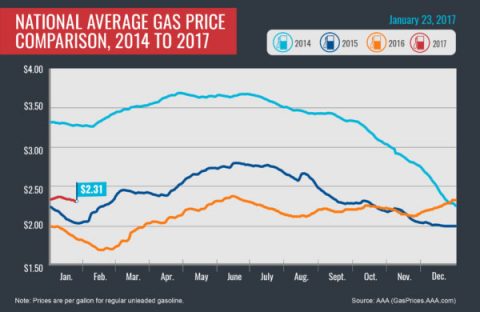 Prices on the West Coast remain the most expensive in the nation, with five states landing on the list of most expensive markets: Hawaii ($3.07), California ($2.80), Alaska ($2.77), Washington ($2.74) and Oregon ($2.54). While prices in most parts of the region have followed the national average trending lower, they have been some of the smallest decreases in the country.

Recent reports from the California Energy Commission (CEC) show that California suppliers currently have a supply of summer blend gasoline on hand and are storing barrels until the upcoming seasonal shift to RVP gasoline.  In the week ending January 13, RFG production was cut by 350,000 bbl to around 6.6 million bbl, yet inventories jumped 184,000 bbl to 6.35 million bbl.

Supply levels for current season gasoline are healthy across the region. OPIS reports that Valero’s Benicia, California, refinery has set a large turnaround schedule that will begin this month.

Prices in the Rockies remained relatively steady over the past week, moving +/- 2 cents or less in most markets. Prices in the region are often geographically insulated from pump price movement tied to global crude oil prices and have generally been among the more stable in the nation.

Drivers in the Great Lakes region continue to see impressive discounts with four states in the region topping the list of largest weekly declines: Ohio (-13 cents), Michigan (-12 cents), Indiana (-8 cents) and Illinois (-8 cents). Most Central States, with the exception of Missouri, saw declines on the week.

The most recent Energy Information Administration (EIA) report shows that Midwest storage levels increased by 1 million-bbl over the past week, to a total of 53 million bbl. Storage increases paired with a drop in demand this month likely attributed to regional and national price declines. Tennessee ($2.11), Indiana ($2.12), Ohio ($2.13) and Missouri ($2.16) all landed on the top 10 list of least expensive markets.

Prices in much of the Mid-Atlantic and Northeast have followed the national average down over the past week with Delaware (- 5 cents), Maryland (-4 cents) and North Carolina (-4 cents) all landing on the top 10 list of largest weekly declines.

The latest EIA report shows that total Northeast gasoline stocks increased by 3.4 million bbl to reach a total of 70.7 million bbl, which is the highest level since August 2016. Despite the declines at the pump, Pennsylvania ($2.61), Washington, D.C. ($2.56), New York ($2.52) and Connecticut ($2.46) remain among the top 10 most expensive markets in the country.

Gas prices in the South and Southeast continue to top the list for lowest prices, with six out of ten of the nation’s cheapest retail markets located in this region: South Carolina ($2.07), Alabama ($2.11), Mississippi ($2.11), Oklahoma ($2.12), Texas ($2.13) and Arkansas ($2.13). Multiple refineries in the Texas area have reported issues over the past few weeks.

LyondellBasell’s 302,300-b/d Houston refinery reported a power outage on Friday, while Western Refining’s refinery in El Paso, Texas, is back online after a fire on January 13. U.S. gasoline exports dropped slightly to 923,000 b/d. OPIS reports that the declines can likely be tied to issues with fog on the Gulf Coast over the past few weeks.

At Sunday’s OPEC meeting, energy ministers announced that the cartel has successfully limited oil output in an effort to reduce oversupply and support crude oil prices. At the meeting, OPEC announced that participating countries had already cut production by 1.5 million barrels per day.

[320rightEleven of OPEC’s 13 members along with 11 non-OPEC countries struck an agreement last November to cut production collectively by 1.8 million barrels per day for the first six months of 2017.

Participating members also agreed to create a joint technical committee (JTC) to work with the OPEC Secretariat in assembling a production data report that will be released the 17th of every month. The JTC will meet again on March 17th in Kuwait.

OPEC’s production announcement did little to impact crude oil futures, which were trading lower early Monday. The drop is likely a result of an increase in U.S. oil production as evidenced by the 35 additional oil rigs reported by Baker Hughes. The introduction of these new rigs brings the total U.S. rig count to 694, which represents a significant increase in output counteracting OPEC’s production cut.

Traders will keep a close eye on how OPEC output cuts and increased U.S. production impact the market moving forward. At the close of Friday’s formal trading session on the NYMEX, WTI closed up $1.05 to settle at $52.42 per barrel.