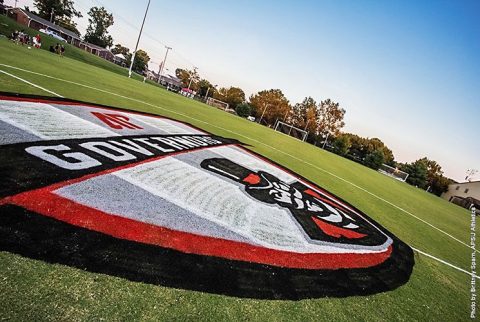 The newest Governors come from eight different states, along with one from Canada, as the APSU coaching staff expanded its search.

“We’re extremely excited. We think this class, overall, is very balanced and has high quality players with great backgrounds and experience playing at a very high level. We searched far and wide, and the class distributed all throughout the U.S. We’re very excited about the talent we having coming to the Peay.”

After an impressive prep career, Brown carries her versatility on the pitch to Clarksville, playing both outside back and outside forward over the last four years.

Brown competed in club soccer for NASA Top Hat Gold. The team was crowned 2015 GA state champions and earned a Region III semifinal berth in 2015, and also finished as a semifinalist in 2014 and 2016.

Brown attends Alan C Pope High School where she has been a four-year varsity starter for Heath Green. The team won the GHSA Region 5A Championship in 2014, while Brown was named to the GHSA All-Region first team in 2016.

Played club soccer for Northwest United FC, coached by Nathaniel White and Kristian Powell, where she was a four-time Washington state champion. Drawdy also led team to a semifinal berth at the U.S. Club Soccer National Cup and competed at the Donosit Cup in Spain, winning the U14 championship.

Drawdy attended Anacortes High School where she made the honor roll all four years. On the pitch, she was a first-team selection her freshman and senior years under head coach Gretchen Hanson.

England will graduate this spring from Epic Charter Schools in Edmond, Oklahoma, where she was a three-year varsity soccer starter. While playing for Matt and Allison Fancher, England won two state titles. She also played club soccer for OFC 99 under head coach Jimmy Hamption.

In addition to being a three-time All State academic honoree, England also has had success in track and cross country, earning Oklahoma Harriet of the Year, two state championships in cross country and one in track.

Kenward is expected to compete for a spot at left back or in the midfield this fall for Austin Peay. Highlighting her prep career came as a member of Space Coast United in Melbourne, Florida – winning the Disney Showcase and was runner-up in the Jefferson Cup.

In 2015, the team was CASL and Florida State Premier League champions, and the year prior, won another CASL title.

Kenward was also a member of four-year district champions Vero Beach High School under head coach Dan Dickens. The team finished second in the state in 2014, and also earned a state semifinal berth in 2016. Academically, Kenward is top 10 percent in her graduating class, an AP Scholar and a member of the National Honors Society.

Head coach Kelley Guth [1] continues to build on the Canadian pipeline with the addition of Ontario’s Claire Larose.

A multi-sport athlete who also ran track/cross country and played basketball along with soccer, Larose carries a solid resume into Austin Peay. She attended Oakridge Secondary School and played for Salt Fleet where she was on the regional team and received an opportunity to play for Ontario Soccer Association.

Larose played in the Ontario Youth Soccer League from 2012-17, winning the U16 Indoor Ontario Cup and was a finalist in the 2015 and 2016 Outdoor Cup. Larose was also a member of the team who finished third at the Disney Showcase Tournament, and fourth at the U18 Soccer Nationals.

A premier goalkeeper at both the club and high school levels, Miller-Foy has a long list of accomplishments as she enters Austin Peay this fall.

With Seattle United, she was a Washington State RCNL Tier 1 champion, and also played for Washington Premier FC – winning with Northwest Champions League.

At Holy Names Academy, Miller-Foy was a three-time All-Metro League first team goalkeeper, and was named one of the top five defensive players in the state to watch by The Seattle Times. From a team perspective, Miller-Foy led Holy Names Academy to a division championship in 2014-15 and back-to-back Elite 8 playoff runs throughout her career.

Clarksville soccer fans should be familiar with the name Gybson Roth after a prestigious four-year career at Clarksville High School under head coach Jeff Jordan.

The Wildcats won four district and regional titles in Roth’s tenure, resulting in three state tournament appearances and hoisting the state trophy on two occasions. Nationally, Clarksville was ranked as the country’s third-best high school team in 2014 and 16th in 2016.

Individually, Roth tallied 67 goals and 78 assists in her prep career, leading to many accolades – a three-time All-Tournament selection, All-District pick as a senior and four All-Area first team nods. She was also a member of the All-State team, All-State Middle Tennessee team and All-State Sports Writers team in her final year.

Roth played for Clarksville Soccer Club-CSC17 under head coach Beth Acreman. She also is a member of the National Honors Society at CHS, and earned an Academic Excellence Award.

The Govs added a JUCO transfer in this year’s class in Shelby Stewart, who initially signed with Utah in 2015 before transferring to Paradise Valley CC in Phoenix.

In her one season there, Stewart helped lead the team to a NJCAA National Championship, recording a school record 22 assists in 2016. Individually, she garnered high praise, including being named second-team All-American and first-team all-conference.

Austin Peay has picked up Therrell from nearby Murray, Kentucky, where she starred as a three-year all-district center back for Murray High School and Shauna Taylor.

The team won three-straight district championships beginning in 2014, including a regional title in 2015. Therrell was also named second team all-region twice and first team once in that span, while being recognized as defensive MVP in her sophomore, junior and senior seasons. She also played soccer locally for Clarksville Soccer Club under head coach Beth Acreman.

Therrell also ran track in high school, and in the classroom, is a member of the National Honors Society.

Abby comes from a sports family, with brothers John and Cody playing football for UNLV and Murray State, respectively. In addition, her father Dennis Therrell is the former defensive coordinator at UNLV, while her mother Dawn was a standout field hockey player at Lock Haven.

Another versatile player, Whittaker had success at both the club and high school levels.

With Lake Norman Soccer Club, Whittaker was named Player of the Tournament at the TFC Showcase, and won the Disney Showcase as a junior after finishing second the year before. The team also won the Denmark Dana Cup championship twice in her career.

At Hopewell High School, Whittaker was a three-time All-Conference selection and a member of the All-Region team as a junior. She also holds the record for most goals in a single-season, and scored 47 in her first three years – helping grab Offensive MVP and Distributor MVP accolades.