Murrfreesboro, TN – Austin Peay State University track and field picked up a pair of individual victories and a huge win in the relays to cap a successful appearance at Saturday’s Middle Tennessee Invitational.

In a meet featuring Ohio Valley Conference foes Belmont, Tennessee State and Eastern Kentucky, the Governors more than held their own in what promises to be a preview of things to come at the end of the month at the OVC Indoor Championships in Charleston, IL. 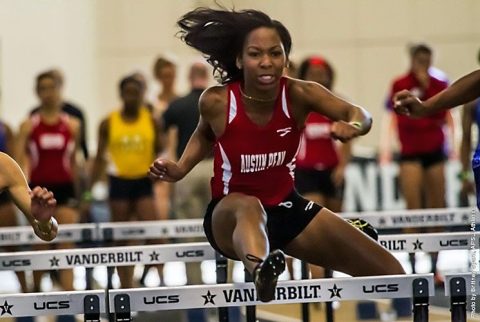 For the third week in a row, senior Kaylnn Pitts [1] picked up a win, this time in the long jump. The Woonsocket, RI, native hit a season-best 5.69m (18-8.00) to move into fourth place in the OVC standings; it’s her first victory in the long jump since the 2015 Governors Invitational.

Austin Peay’s other victory came in the 55m hurdles, where senior Myiah Johnson [3] found the proverbial top of the podium thanks to an 8.15 mark, moving into the league’s top-eight in the 60m hurdles thanks to track size conversion (8.77). For Johnson, the win gives her back-to-back 55m hurdle titles at the Middle Tennessee Invitational. Christiana Harris [4] finished third in the event with a personal-best 8.32.

With a runner-up in the 200m dash and a third-place finish in the 55m event, freshman Diamond Battle continues to establish herself as a star-in-waiting in the sprints. Her 25.27 in the 200m was six-hundredths of a second off her career-best, while her 7.14 was a personal-best which, converting to a 7.65 for track size, places her sixth in the OVC in the 60m dash. Fellow freshman Garielle Netter finished just behind Battle in both the 55m (7.24) and 200m (personal-best 25.71) events.

“Our freshman are really starting to come on strong,” said head coach Doug Molnar [9]. “It’s great to see how they’re developing. Our hurdlers did a real nice job. While it wasn’t a great time in the mile relay, we’re always happy to close out the meet with a win.”

“The vaulters got us going at Carbondale and really got the rest of the team fired up,” Molnar said. “Overall, we did a pretty good job today. We’ll take the next week off, work on some technical stuff and iron some things out before we head to Ohio State in two weeks.”