The Governors enter the weekend in a four-team tie for sixth place at 6-7, with the top eight teams advancing to the OVC Tournament in March. 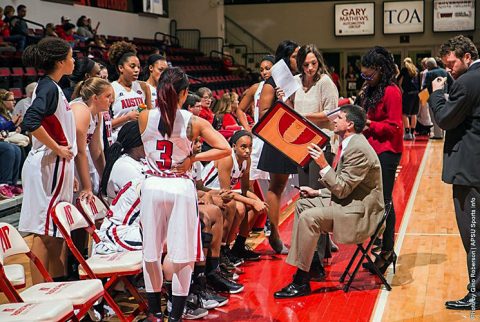 Austin Peay will play two teams in the grouping to conclude the season – UT Martin and Southeast Missouri – but first have a crucial meeting with the Panthers this Saturday.

Most recently, the Govs suffered a 76-69 road loss at SIU Edwardsville, but received another standout performance by Banks (25 points, 11 rebounds). She became the first APSU player in program history to have 20-plus points in seven consecutive games, while in the process, recording her 15th career double-double.

Prior to tip-off, APSU’s four seniors – Tearra Banks [3], Beth Rates [4], April Rivers [5] and Jacey Scott [6] – will be recognized in a special presentation.

The Panthers are 4-10 in conference play this season, with wins over Jacksonville State, UT Martin, Southeast Missouri and Tennessee Tech. However, they travel to Clarksville with three-straight defeats, including a 107-65 loss to SEMO.

Grace Lennox continues to fill up the statsheet for the Panthers – the fourth-leading scorer in the OVC at 16.2 points per game – while also averaging a league-high 38.3 minutes played per contest. Erica Brown (11.8 ppg) and Jalisha Smith (10.3 ppg) are also playmakers to watch.

Last Time Against the Panthers

Austin Peay earned a 69-59 victory over EIU, January 14th, in Charleston. Banks and Baker led the way with 16 and 15 points, respectively, while Rates had 11. Lennox scored 22 for the Panthers in a losing effort.

Banks on pace for seventh place. After moving to eighth all-time in scoring at Austin Peay, Banks is now 68 points away from reaching seventh place, currently with 1,375 career points.

Rates one block away from second-place tie. Currently with 123 blocked shots, Rates is one away from tying Amanda Behrenbrinker for second in program history. She is also expected to make her 102nd career start which would pass Nicole Olszewski for eighth all-time.

Baker for three. Baker has made a three-pointer in eight consecutive games, including and five in the last three matchups.

Gregory stepping up. The sophomore guard has found her groove in the last two games, averaging 15 points and 6.5 rebounds in that span.

Be sure to follow all the Austin Peay women’s basketball action at LetsGoPeay.com and the official Facebook page of Austin Peay Athletics. In addition, live play-by-play coverage can be found on Twitter (@AustinPeayWBB), while fans can watch the game on OVCDigitalNetwork.com