Clarksville, TN – Austin Peay State University men’s basketball team will host SIU Edwardsville with a lot on the line in a 6:30pm, Saturday, tipoff in the Dunn Center.

At 5-8 in league play, wins are paramount for the Governors, who face a winless Cougar squad in the regular season home finale. Tennessee Tech, Southeast Missouri and Tennessee State currently stand as the sixth, seventh and eighth seeds for the OVC Tournament, each with seven wins entering the weekend. 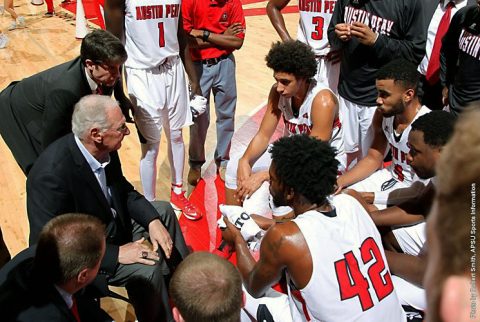 Saturday will be Senior Night, honoring Assane Diop [1], Kenny Jones [2] and John Murry [3] for their contributions to the program. Halftime festivities also will feature a performance from Acrodunk.

It’s a desperate SIU Edwardsville squad visiting the Dunn Center in search of its first Ohio Valley Conference victory of the season and its first victory of any sort since December 28th–the Cougars have but four wins against Division I opponents this season, all of which came in November.

Josh Robinson [5] broke out, scoring 22 of his 25 points in the second half. Despite the prowess of two perimeter players, the Governors did their damage inside, outscoring Eastern Illinois 34-16 in the paint.

Last Time Out Against SIU Edwardsville

The Govs held off SIU Edwardsville before a national audience on the CBS Sports Network, taking an 83-81 overtime win for their first OVC victory of the campaign.

John Murry [3] tallied 23 points in a career-high 43 points, while St. Louis native Josh Robinson [5] returned to the area with a 26-point outburst.

Movin’ On Up: Robinson needs 93 to pass the legendary James “Fly” Williams for 11th all-time in scoring.

Murry has needed less than five minutes to tally 10 or more points on nine occasions this season, including once in each half against Eastern Illinois, Thursday night. Since the start of OVC play, he’s averaging 19.8 ppg, hitting 46.6 percent (83-for-178) from the floor and 80.2 percent (73-for-91) from the free-throw line.

Robinson (20.6 ppg) and Murry (19.8 ppg) are the only set of teammates among the top-five in scoring during league play, ranking fourth and fifth, respectively. Robinson is still challenging for the overall scoring title, ranking third at 20.9 ppg behind Murray State’s Jonathan Stark (21.3 ppg) and Belmont’s Evan Bradds (21.1 ppg).

Since the start of league play, Jared Savage [6] has six multi-steal games and ranks second behind only Tennessee State’s Tahjere McCall (1.8 spg).

Check back at LetsGoPeay.com and on Austin Peay’s Official Athletics Facebook page often for up-to-date news about all Governor athletics, as well as the Governor men’s basketball Twitter page (@AustinPeayMBB). Live stats will be available during the game at PeayStats.com, and all home games and Ohio Valley Conference games can be viewed on www.ovcdigitalnetwork.com [8]

Postgame video interviews and other videos from around APSU Athletics can be found on our YouTube page (www.youtube.com/letsgopeay). [9]