Mayor McMillan urges motorists to slow down and be patient

Clarksville, TN – With several intersection improvement projects under way, travel is tough on the southernmost route connecting Interstate 24 at Exit 11 with downtown Clarksville. 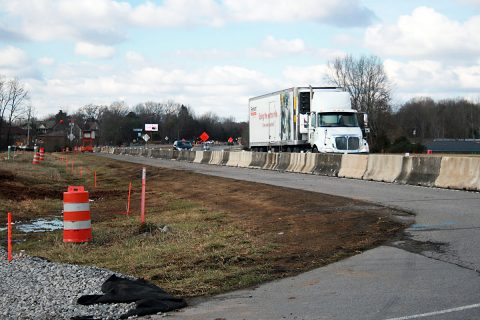 Barriers line the right side of Martin Luther King Jr. near Vaughan Road, where TDOT has begun to install a new traffic signal and turn lanes.

“These are mostly state Department of Transportation projects, which have been advanced with City of Clarksville input and resources,” Carksville Mayor Kim McMillan said. “Expanding the capacity of our roadways and adding safety enhancements, such as traffic signals at key intersections, is essential for our community’s growth. While the construction unfolds, motorists really must observe the reduced speed limits and be careful!”

Key pressure points right now are on MLK Parkway at Vaughan Road and at Trough Springs Road, where concrete barriers have been placed, narrowing the roadway and separating traffic from work under way on the shoulders. The speed limit has been reduced to 45 mph on MLK Parkway.

The Clarksville City Street Department, in cooperation with the Tennessee Department of Transportation, has announced these developments: