Washington, D.C. – The number of instruments on the International Space Station [1] dedicated to observing Earth to increase our understanding of our home planet continues to grow.

Two new instruments are scheduled to make their way to the station on the SpaceX Dragon capsule.

The Stratospheric Aerosol and Gas Experiment (SAGE) III instrument [2] will monitor the condition of the ozone layer, which covers an area in the stratosphere 10 to 30 miles (16 to 48 kilometers) above Earth and protects the planet from the sun’s harmful ultraviolet radiation. 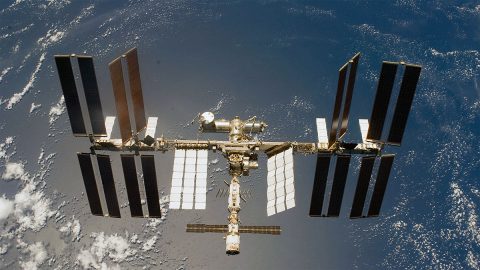 The International Space Station is becoming an increasingly busy platform for studying our home planet. (NASA)

Its predecessors, SAGE I and SAGE II, which were mounted to satellites, helped scientists understand the causes and effects of the Antarctic ozone hole.

The Montreal Protocol of 1987 led to an eventual ban on ozone-destroying gases and to the ozone layer’s recovery; SAGE III, designed to operate for no less than three years, will allow scientists to continue monitoring its recovery.

The Lightning Imaging Sensor (LIS), first launched as an instrument on the Tropical Rainfall Measuring Mission [3] in 1997, records the time, energy output and location of lightning events around the world, day and night. From its perch on the ISS, the new LIS will improve coverage of lightning events over the oceans and also in the Northern Hemisphere during its summer months. 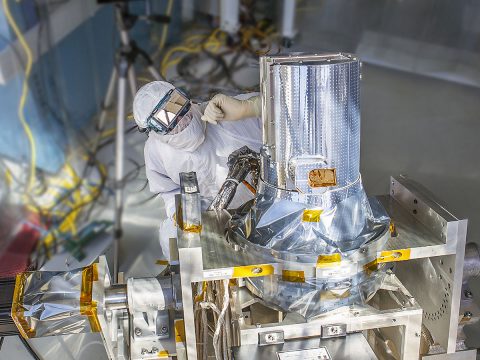 Because lightning is both a factor and a gauge for a number of atmospheric processes, NASA as well as other agencies will use the new LIS lightning data for many applications, from weather forecasting to climate modeling and air quality studies.

While SAGE III and LIS are the latest Earth science instruments slated for operation aboard the ISS, they are not the first or the last.

For two years, beginning in September 2014, the Rapid Scatterometer, or RapidScat [4], collected near-real-time data on ocean wind speed and direction. The instrument, built and managed by NASA’s Jet Propulsion Laboratory, Pasadena, California, was designed as a low-cost replacement for JPL’s Quick Scatterometer, or QuikScat satellite [5], which experienced an age-related failure in 2009.

In addition to addressing such questions as how changing winds affect sea surface temperatures during an El Niño season, RapidScat data were used by the National Oceanic and Atmospheric Administration and the U.S. Navy for improved tracking of marine weather, leading to more optimal ship routing and hazard avoidance.

The Cloud Aerosol Transport System [7] (CATS) was mounted to the exterior of the space station in Jan. 2015 and is in the midst of a three-year mission to measure aerosols, such as dust plumes, wildfires and volcanic ash, around the world.

Over the next several years, NASA is planning to send to the space station several more instruments trained toward Earth.

The data are critical for climate modeling and atmospheric studies. TSIS-1 will continue the work of NASA’s Solar Radiation and Climate Experiment satellite, which has been taking those measurements since 2003. 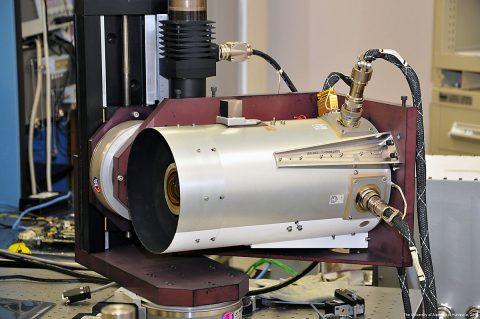 NASA’s Earth System Science Pathfinder program is supporting the following instruments that are currently in development. The program is managed by NASA’s Langley Research Center in Hampton, Virginia.

The JPL-built and managed Orbiting Carbon Observatory-3 [9] (OCO-3) instrument will monitor carbon dioxide distribution around the globe. Assembled with spare parts from the Orbiting Carbon Observatory-2 satellite, also built and managed by JPL, OCO-3 will provide insights into the role of carbon dioxide as it relates to growing urban areas and changes in fossil fuel combustion. The instrument will also measure the “glow” from growing plants (known as solar-induced fluorescence).

Homing in on tropical and temperate forests is the Global Ecosystem Dynamics Investigation [11] (GEDI). The lidar instrument will provide the first high-resolution observations of forest vertical structure in an effort to answer how much carbon is stored in these ecosystems and also what impacts deforestation and reforestation have on habitat diversity, the global carbon cycle and climate change.

The JPL-built and managed ECOsystem Spaceborne Thermal Radiometer Experiment (ECOSTRESS) [12] will also focus on vegetation by providing high-frequency, high-resolution measurements of plant temperature and plant water use. Among the data’s numerous uses will be to indicate regions of plant heat and water stress and also improve drought forecasting for the benefit of farmers and water managers. Researchers will also use ECOSTRESS in concert with other data to calculate water use efficiency among plants and identify drought-resistant species and varieties.

NASA collects data from space to increase our understanding of our home planet, improve lives and safeguard our future. For more information about NASA’s Earth science programs, visit:
http://www.nasa.gov/earth [14]

Keep up with the International Space Station at:
http://www.nasa.gov/station [15]