The U.S. preliminary rate for January is 4.8 percent, up one-tenth of a percentage point from the previous month.

While experiencing a rate increase from 4.8 to 5.4 percent over the past year in Tennessee, the national rate has declined from 4.9 to 4.8 percent within the same time span.

“Our workforce is strengthened with increased opportunity, as international companies continue to invest in Tennessee because of the business advantages we offer,” remarked Commissioner Phillips.

Over the year, nonfarm employment increased by 58,800 jobs. The largest increases occurred in trade/transportation/utilities, leisure/hospitality, and professional/business services. 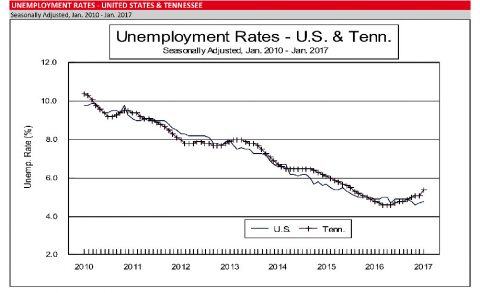 The Economic Analysis and Labor Force Estimates are prepared by the Employment Security division’s labor market information specialists. The division reports metrics and contextual information as it relates to employment, income, and population in Tennessee. Economical issues are narrated in monthly newsletters and additional resources are available on Jobs4TN.gov.