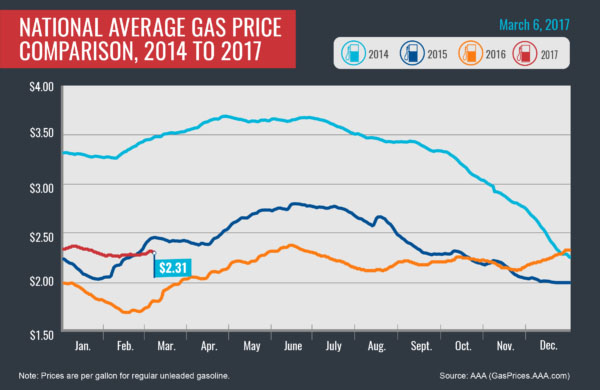 Tampa, FL – Oil prices slipped fractions of a penny over the weekend, reaching today’s national average price for regular unleaded gasoline of $2.31 per gallon. Today’s price is still two cents more than one week ago, four cents more compared to one month ago and 50 cents more per gallon year-over-year.

Retail prices continue to fluctuate but have remained between $2.28-2.32 for more than a month as reports of increased U.S. production continues to counter OPEC rebalancing efforts. 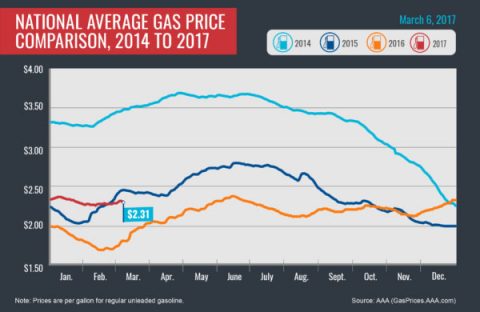 The latest EIA report shows that West Coast refineries cut processing by 25,000 b/d to a total of 2.206 million b/d of crude oil for the week ending February 24th.

Issues on the Wahsatch Pipeline are creating tight supply and price increases across most of the region. Plains All American Pipeline released a statement Friday saying that the Salt Lake City, Utah, crude pipeline is expected to reopen this weekend, after shutting down February 10 due to indications of soil movement. The Wahsatch Pipeline receives crude oil from locations near Evanston, Wyoming, and makes deliveries to refineries in Salt Lake City. OPIS reports that Tesoro and HollyFrontier have cut output at their Salt Lake City refineries due to low supplies.

These regions saw some of the most dramatic price increases this week: Michigan (+12 cents), Indiana (+11 cents), Ohio (+9 cents), Illinois (+7 cents) and Kentucky (+6 cents). Price increases can be attributed to issues at some regional refineries. Last week, Phillips 66 reported problems with an oil-processing unit at its 330,000-b/d Wood River refinery in Roxana, Illinois.

The Northeast and Mid-Atlantic are some of the only regions to see moderate declines on the week. Maine, New Jersey, Pennsylvania, New York, New Hampshire, Massachusetts and Connecticut all saw pump prices move down by a penny or less. Gasoline inventories remain high in the regions. OPIS reports that the healthy supply should keep prices relatively stable as the market prepares for the transition to summer-blend gasoline. Despite minor declines on the week, Pennsylvania ($2.50), Washington D.C. ($2.48) and New York ($2.45) remain some of the most expensive markets in the country.

OPIS reports that Valero experienced some issues at its refinery in Corpus Christi, Texas, last week when a compressor tripped offline due to an instrumentation failure.

Today, markets opened posting crude oil losses pressured lower by an increasing U.S. rig count and questions about Russia’s ability to comply with OPEC cuts. Oil production in the U.S. continues to rise, and according to oil services company Baker Hughes, U.S. drillers added seven oil rigs last week, bringing the total rig count up to 609, the most since October 2015.

Globally, the Russian energy ministry released oil production data showing that their oil production has remained unchanged as compared to last month. This information has unsettled traders and many speculate whether or not Russia will thwart efforts by OPEC to rebalance global oil supply.  Traders will continue to watch how the market reacts to increased U.S. oil production and look for signs as to whether or not Russia implements production cuts. At the closing of Friday’s formal trading session on the NYMEX, WTI was up 72 cents to settle at $53.33 per barrel.

Motorists can find current gas prices along their route with the free AAA Mobile app for iPhone, iPad and Android. The app can also be used to map a route, find discounts, book a hotel and access AAA roadside assistance. Learn more at www.AAA.com/mobile