He will leave the Army at the end August, but he has already started preparing for his transition. Harbin said he feels confident he will be able to find employment allowing him to eventually reach his long-term goals of going to college for graphic design and business management as well as becoming an entrepreneur. 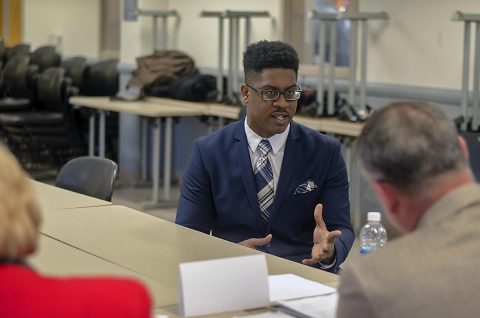 To reach his long-term goals requires establishing himself as a civilian worker and he appreciated the opportunities the job fair created for him.

“I think it’s an incredible thing that Fort Campbell is doing, having the people come down from all of these companies and [hiring] Soldiers,” Harbin said.

He was sharply dressed in civilian professional attire and he was confident as he shook hands with recruiters and learned more about employment opportunities with Intel, The Travelers Company, R.J. Corman Railroad Group and many other companies. However, he had an edge provided by the WTB. 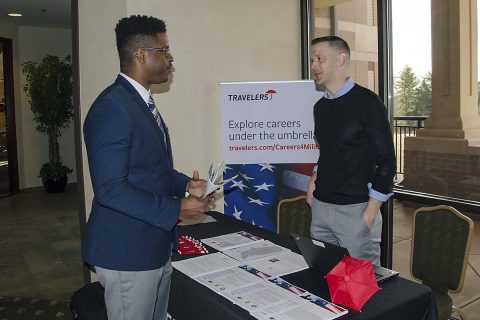 On Harbin’s panel was Jim Durrett, Montgomery County mayor, Mariah Carey, human resources director with Lowes and Connie Freeman, executive assistant to the chief executive officer at 1st Advantage Bank. Harbin had to answer interview questions with them for about 30 minutes.

For Harbin the WTB has been a great help to ease his transition back into civilian life. It provides help to Soldiers like him who are actively seeking to improve their skills and find a good job, Harbin said. However, he said people only get out what they put in, while they are at the unit.

“The [WTB] offers career opportunities, they offer career education, they offer education on education, like this is the information you need to know before you start going to school,” Harbin said. “It’s a lot of great things the WTB has brought to the table and from what I hear we do better than the other WTUs and it’s really just a great opportunity just to be here.”

Other services the WTB provide in addition to everything else they have helped him with is a shuttle service, which helps Soldiers who do not have transportation or cannot drive because of their medical conditions, Harbin said. He said the experience of the people who work there is also an invaluable resource.

Since beginning his transition he has completed all of the required classes offered through the SFL-TAP program and has taken advantage of going to every job fair held on the post.

“I’ve never been to so many job fairs in my life,” Harbin said. “I’m extremely prepared. I was focused. Even though I already had resumes and things like that I continuously went to reestablish stuff. I reworked them. I looked over them again and gave them out to different people to get their feedback on how my resume looked.”

For many Soldiers, especially those in the WTB, Harbin said it is hard for them to let go of their military career and embrace being a civilian. However, since Harbin had civilian jobs before joining the Army and had served in the reserves he felt more prepared to complete his transition.

Transitioning Soldiers must look forward and not focus on things in the military that you wanted to do but cannot do now, Harbin said.

“You have to learn to accept that you have to let those things go and be prepared to move on,” Harbin said. “Even though you have your resume done and ready and good to go doesn’t mean you are ready to go out and meet people and shake hands and see what the world has to offer. You still have to have that open mind and that readiness, just to accept the fact that you’re about to transition into a new step of life.”

During the mock interview, one of the questions the panel asked Harbin was what does military experience offer civilian employers and Harbin said it came down to traits Soldier developed by serving their nation. Soldiers make great employees because they are punctual, they strive for excellence, they emulate great role models, they do not accept failure, they are resilient and they motivate other members of their team, Harbin said.

Leadership was also another important trait Soldiers learned during their time in the Army, which would directly benefit them in civilian careers.

He followed up by saying he had learned to be a leader who takes care of his subordinates in the Army.

Part of the reason why the mock interviews and the job fairs are so important to Harbin is because searching for jobs has changed in the digital era. So Soldiers must prepare in every way possible to be successful.

“[Preparing] will change your course of thinking about how you need to approach the situation,” Harbin said. “You just can’t go out knocking on windows and say ‘Hey I want a job! Give me a job.’”

After taking advantage of the SFL-TAP classes and resources offered by the WTB Harbin said he felt 100 percent confident he would find a civilian career. He said as long as Soldiers take their transitions seriously they can find success.