Clarksville, TN – Faced with a rare opportunity to impress recruiters from one of the most sought-after internships in America, automotive manufacturer Tesla, Inc., Austin Peay State University junior physics major Jonathan Bunton said he felt he needed to combat a common misconception in the tech sector. 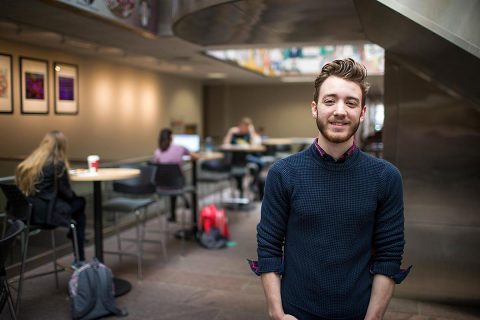 “A lot of times, some industries get hung up on finding interns from big names like M.I.T. or Cal Berkley, but I knew that I just needed a chance to show that students who are just as skilled, or more skilled than any other candidates don’t have to come from those massive, well-known schools,” Bunton said.

With a focus on engineering electric cars, battery energy storage and solar energy, Tesla is one company that is admittedly looking to change the world.

It stands to reason then, that it could change the way it finds new talent, accepting Bunton over students from major universities for a summer internship with the Palo Alto-based company.

Bunton will be spending the summer interning with Tesla’s quality engineering department. His focus, Bunton said, will be on the charging units Tesla employs to provide electricity to its gasoline-free automobiles. Bunton will spend three months in Fremont, California, as a full-time intern, learning the ins and outs of the product line and troubleshooting defective products as they present themselves.

“What we’ll be doing is working directly with the manufacturers, so if something comes off the line funky or abnormal, we’re figuring out the problem, finding the problem’s cause and figuring out how to fix the problem,” Bunton said. “There’s actually a lot more that is going on with a charging unit than you’d think; it’s a lot more than just a charging port on a wall and the actual car itself. There’s a lot of voltage you’re shoving through a circuit, and there’s a lot of detectors and monitoring going on to tell the car if its full of energy or not.

Bunton was able to sell himself to Tesla during the interview process, he said due to his body of undergraduate research experience. Working alongside Austin Peay classmates and professors as a member of the Department of Physics and Astronomy’s Materials Group, Bunton has over a year of hands-on experience applying glass thin films for use in applications such as optical computing and memory devices.

“The interview process was stressful, but they asked questions about my (undergraduate) research work and I was able to go into detail about what I’ve done over the past year with (Dr. Andriy Kovalskiy, Austin Peay physics professor) and my research teammates on the glass team,” Bunton said.

“I think the scientific method prepares someone for that kind of environment. Say there’s some problem or some effect that we’re observing, we need to try and figure out exactly how to fix it or how it’s working, so that we are better prepared for the future. After we get the results, we analyze them and try to draw conclusions,” Bunton stated.

A Northeast High School graduate and an alumnus of APSU’s Governor’s School for Computational Physics, a summer school for high-achieving high school students with an interest in engineering, math and science, Bunton said his time at Austin Peay has prepared him for his opportunity with Tesla.

While other universities may have a famous pedigree, he praised his education and experience at Austin Peay as making him competitive with his soon-to-be peers in Silicon Valley.

“I’ve come to appreciate that, after just my freshman year, I already knew all of the physics faculty at Austin Peay,” Bunton said. “The biggest class I’ve been in has maybe been 25 students, and when you’re talking about classes like advanced quantum mechanics, that’s a really big deal to get that face-to-face attention from faculty…I haven’t limited myself at all (by staying in Middle Tennessee.)”

For more information on APSU’s Department of Physics and Astronomy, visit www.apsu.edu/physics [2]