The $28 million project includes resurfacing the runway, repairing ramps, taxiways, adding lights to the secondary runway, and moving lights to make them easier to maintain on the main runways.

Terry Ennis, airfield manager for Campbell Army Airfield, said the repairs also will decrease the runway width by 50 feet to the industry standard of 150 feet in width. Its overall length will decrease from 11,822 feet to 10,500 feet. The excess portion of the runways will become paved overrun that serve as a safety measure to decrease damage to aircraft on takeoff and landings if something goes wrong.

The runway’s pavement condition index, which is a scale determined by rigorous inspection of a runway’s surface, dropped precipitously from 2013 to 2015, Ennis said. This necessitated the repairs.

“Our PCI in 2013 on the runway was 71,” he said. “The Air Force doesn’t like anything below a 70. In two years it went from a 71 to a 36 and that’s why the Air Force started getting concerned and we started having to look at redoing our runway, because they don’t want to land on anything below 40.”

The last time Campbell Army Airfield underwent major repairs was approximately 10 years ago. Runways deteriorate overtime based on usage and weather. Runways made of asphalt normally last for 15 to 20 years before requiring a major overhaul.

“We had problems with the last repair that was done,” Ennis said. “This area has a high degree of difficulty with aggregate … the rock that they used on this project was porous, so over a period of time as water gets into the rock and expands and contracts due to temperature changes, it basically started popping the rock out of the runway.[That] creates what we call FOD, foreign object debris, which has caused damage to engines on airplanes and engines on airplanes are a million dollars plus.” 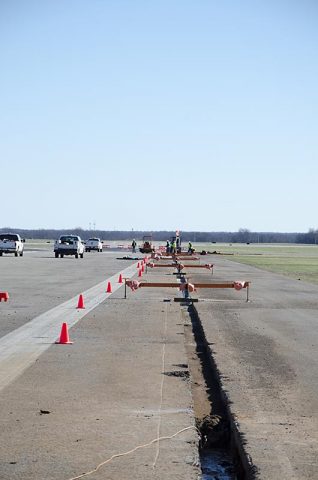 Although rotor wing aircraft have engines mounted higher on the aircraft and equipped with filters to reduce damage from FOD, their rotors are still subject to FOD damage.

“The problem with FOD on a helicopter is that what the rotor blades are turning they’ll suck all of that stuff off the ground into the blade and it tears down the blade, especially sand,” Ennis said. “The average blade on a helicopter is about $250,000 for one piece.”

Besides pieces of aggregate loosening from the asphalt and turning into FOD, the runways is experiencing cracking outside of the seams, which can eventually result in potential aircraft damaging potholes in the runway. Concrete ramps also are cracking and the surface is deteriorating resulting in FOD.

Because of the cost of the repairs, the Army Corps of Engineers set out the contract.

To support flights at Sabre Army Airfield and Nashville International Airport, Ennis said the flight operations team will move aircraft ground support equipment, ground power units, air start units, forklifts and a K-loader to each location. The Logistics Readiness Center will facilitate the move to Sabre Army Airfield and commercial long-haul will move the equipment to Nashville, where Fort Campbell has contracted space to temporarily conduct operations there.

“We will move part of our manpower down to Sabre to assist them with the additional hours that we will be working down there,” Ennis said. “Outside of that [the repairs] will actually increase our workload because we will be out monitoring all of the construction activities to make sure they are doing everything they are supposed to do – being in compliance, trying to keep them away from the traffic that’s operating, so we’ll be much busier actually.”

Work on repairing some of the taxiways has already begun and to save money and time is using an innovative method for repairing the concrete. Instead of breaking up the concrete with jackhammers and damaging the rock sub-base layer, workers cut the concrete into sections and construction equipment with a suction device on it will lift all of the concrete sections onto a dump-truck for disposal.

“So an airfield is roughly based on the type of aircraft you service,” Ennis said. “The runway is only 16-20 inches thick. It’s a primary [overlay] with a concrete underlay … you basically put four inches of asphalt on top of this concrete layer and you groove the asphalt and what it does is allow the water to run off the runway, which helps braking action on the runway.”

A mill similar to ones used on highway construction will grind up the asphalt on the runway. Crews will examine the underlying concrete to ensure the concrete is structurally sound then repave the runway. The repairs will also work to increase the pavement condition number of sections of the airfield to increase the aircraft weight those sections can handle.

Ennis has worked at Fort Campbell for about 22 years and has been in his current job since 2012. He said that while airfields and runways can be expensive to maintain and operate that Campbell Army Air Field is very important to both Fort Campbell and the Army as a whole because it supports not only the 101st Abn. Div., but it also supports the 160ths SOAR and the 5th Special Forces Group.

Both of the special operations units constantly use Campbell Army Airfield to deploy at a moment’s notice around the world to defend the nation, even more than the 101st Abn. Div. uses the airfield for its own deployments, Ennis said, which is why it is essential that the runways and taxiways remain in good condition.