The Govs and Bruins are scheduled to open the series with a 6:00pm, Friday contest followed by 1:00pm contests both Saturday and Sunday. 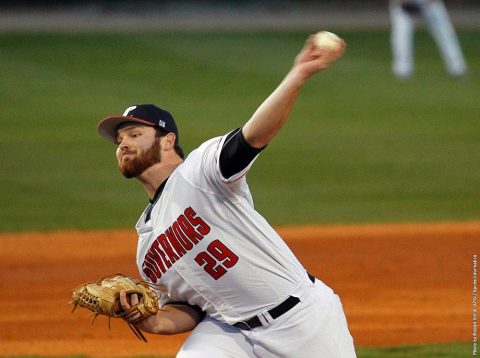 Austin Peay will look to begin its march toward the top of the OVC standings with just six OVC series remaining.

The Govs slipped to eighth after last week’s series loss at Southeast Missouri.

Meanwhile, Belmont has opened OVC play with an 8-4 record and sits third after the first four weekends.

Austin Peay and Belmont have played just four series since the latter joined the OVC in 2013. The Govs have won all four series, but have not swept any of the sets. However, the Govs and Bruins have been playing since 1954 with 104 meetings all time, APSU holding a 68-36 edge in those contests, including a 26-14 record in Clarksville.

Junior Garrett Giovannelli [5] moved into the designated hitter spot for the past two games after starting 24 games at second base. Senior right fielder Chase Hamilton [6] has a hit in seven of his last nine games, posting seven RBI in that span.

Freshman third baseman Landon Kelly [7] is batting .300 in seven OVC games this season. Sophomore catcher David Martinez [8] has started behind the plate in each of the Govs last three games and has three hits and three walks in those contests. Sophomore Brett Newberg [2] has an extra-base hit in three of his last four pinch-hit appearances (3-for-3, 2B, 2 HR, 4 RBI, HBP).

Redshirt freshman infielder Parker Phillips [9] has missed three games due to an upper body injury and his status is day-to-day entering weekend. Redshirt freshman Max Remy [10] has started each of the past four games in the middle infield and has four hits and four RBI in that stretch.

Freshman Tyler Hubbard [13] became the 13th different Govs batter to hit a home run in 2017, breaking the program record for most players with a home run in a season. Hubbard also became the second Govs hitter to drive a pinch-hit home run this season (Newberg the other). Austin Peay’s 44 home runs already ranks 16th on the team’s single-season record list as the season’s second half gets underway.

Staff Notes
APSU pitchers continue to record strikeouts, racking up 234 Ks through 248 innings this season. The team’s 8.49 strikeouts per nine innings would break the program record and ranks 79th nationally. After notching one save in the season’s first 26 games, the Govs bullpen has a save in back-to-back games entering the weekend.

Left-hander Brett Newberg [2] will move into the No. 2 role against Belmont. He picked up a win in his first OVC start, last weekend, at Southeast Missouri. APSU has not named a starter for Sunday’s contest.

The Govs start another five-game road trip with their Ohio Valley Conference series at Eastern Kentucky. Due to the Easter holiday, that series will be played Thursday-Saturday.