Pasadena, CA – These raw, unprocessed images of Saturn’s moon, Atlas, were taken on April 12th, 2017, by NASA’s Cassini spacecraft. The flyby had a close-approach distance of about 7,000 miles (11,000 kilometers).

These images are the closest ever taken of Atlas and will help to characterize its shape and geology. Atlas (19 miles, or 30 kilometers across) orbits Saturn just outside the A ring — the outermost of the planet’s bright, main rings. 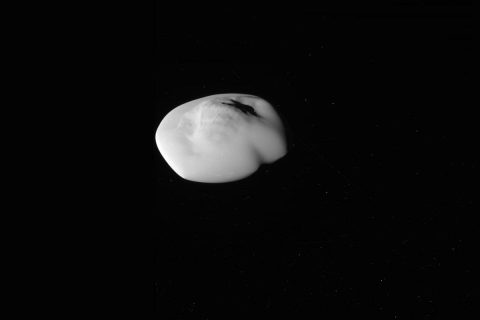 Additional raw images from Cassini are available at:

The Cassini-Huygens mission is a cooperative project of NASA, ESA (European Space Agency) and the Italian Space Agency. NASA’s Jet Propulsion Laboratory in Pasadena, California, manages the mission for the agency’s Science Mission Directorate in Washington.

The Cassini imaging operations center is based at the Space Science Institute in Boulder, Colorado. Caltech in Pasadena manages JPL for NASA.