Clarksville, TN – When German-born Angelika Schrobsdorff returned to her home country in 2006 after decades abroad, the accomplished writer and Holocaust survivor said it was her hope to “die in my own language.”

Schrobsdorff would ultimately receive her wish, dying in Berlin in 2016 at the age of 88. 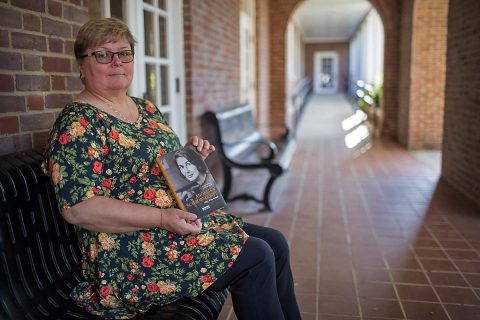 But while her life’s story ended where it began, the daughter of a Christian father and a Jewish mother lived a fascinating life between those moments; one Austin Peay State University associate professor Dr. Beatrix Brockman has told in her new German-language biography, “Angelika Schrobsdorff: Leben ohne Heimat.”

“Angelika Schrobsdorff was persecuted by the Germans because she was a Jew. After the war, she was persecuted by the Bulgarians for being German. And before she died, she moved back to Germany from her home in Jerusalem because she saw her own Jewish people persecuting Palestinians in a way that reminded her of the Germans,” Brockman said. “She led a very remarkable life, and this book tells her story, from start to finish.”

Born into a wealthy Berlin family, Schrobsdorff grew up with her mother, an assimilated Jew, and her sister in Berlin. In 1939, she fled to Bulgaria to escape the Nazi rule, while her father stayed behind at the wishes of his wealthy family. Post-war persecution of Germans living in countries previously occupied by the Nazis forced Schrobsdorff back to her native country, before a marriage to French filmmaker Claude Lanzmann brought her to Paris, and ultimately, Jerusalem, where she lived before returning to Berlin late in life.

An accomplished author, Schrobsdorff’s first novel, “Die Herren” brought her fame. She would go on to publish 12 more books, many about her life in Bulgaria. Her memoir of her mother, “Du bist nicht so wie andre Mütter” was a best-seller and was also made into a movie for German television. It would later be translated into English under the title “You Are Not Like Other Mothers.”

Brockman’s involvement in the project came about through a pre-existing relationship with the editor of the book and accomplished photographer, Rengha Rodewill. Before her passing, Schrobsdorff had been working with Rodewill to pitch the biography to publishers, but needed Brockman’s help as a literary scholar and researcher to write the manuscript.

“I came on board in the summer of 2016, but it was not until September that we found a publisher and work could really get underway,” Brockman said. “I ended up having to go very quickly, however, because I thought I’d have until summer of 2017 to finish the manuscript, but we were asked by the publisher to have it done just two months later (November 2016).

“(Once the deadline was set), there were no free weekends or evenings for a couple of months as I was getting together the information for the manuscript.”

While Schrobsdorff had written numerous novels on her experiences, they were outwardly presented as works of fiction, with names changed to suit the narrative. So while her books provided the information, the road to a complete biography meant Brockman needed to become somewhat of a detective.

“I read everything I could get my hands on, and the information was all over the place as I tried to piece together the chronology of her life,” Brockman said. “For instance, the men in her life were mostly mentioned under pseudonyms (in her books), so I had to untangle things to find who was who and what this meant and who other people could really be.

“What I tried to do in the book was ultimately let her speak for herself and precede or follow her comments with summaries and analyses of how and why she depicted her life’s story in the manner she did.”

For more information on APSU’s Department of Languages and Literature, visit www.apsu.edu/langlit [2]