HomeArts/LeisureDodging the Roadkill: Visiting the Ghost of Alice Flagg
Arts/Leisure

Dodging the Roadkill: Visiting the Ghost of Alice Flagg

Apparently, dear old Alice is buried here, and I MUST pay her a visit.

Alice Flagg was the younger sister of Dr. Allard Flagg. Dr. Flagg is believed to have built The Hermitage, in Murrells Inlet, South Carolina. The home was built in 1848. It was originally the summer home of Methodist minister James Belin.

Alice was a typical southern belle, who at the age of sixteen, met a man whom her family felt wasn’t good enough for her. Alice fell in love with this “lumberman” and had to resort to sneaking about to be with him.

Eventually, the man proposed to Alice and she accepted. Knowing her family wouldn’t approve, she didn’t wear the ring he had given her, instead, she wore it on a ribbon around her neck where she could conceal it in her blouse.

Her family continued to object to their relationship and Alice moved to Charleston. Her fiancé visited her for the Spring Ball and they spent the entire night just dancing away. Her family was not in Charleston, and it was the happiest night of her life.

Alice then fell ill with a fever that was prevalent 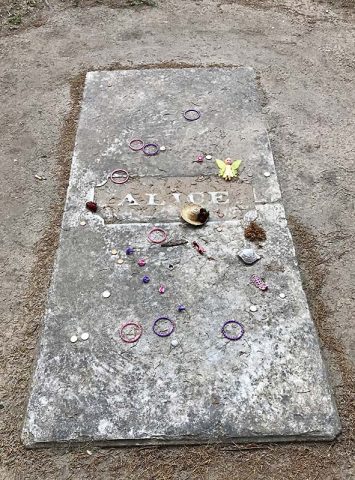 in the area at the time. Dr. Flagg came to take his sister home and when he was caring for her, he noticed the ring.

Furious, Dr. Flagg ripped the ribbon from her neck and flung it into the nearby creek. Alice, near death, begged her family and friends to find the ring.

It was never found.

She died the following week and was eventually buried at the All Saints Church. The story goes that her ghost still wanders the halls of the Hermitage and visitors have said they have seen her spirit in the mirror of her room.

It’s believed that she’s still looking for the ring.

Visitors to her grave always bring something “round” to place on her grave as a tribute to her and the ring. Once you give your gift, you are to walk around the grave three times and if her spirit is there, then you will feel a “tug” on the ring you’re wearing.

I didn’t see or “feel” the ghost of Alice Flagg on my visit, but her story is intriguing.

I love the people, places AND ghosts I meet on this bike.