APSU Baseball bounces back for 8-5 win over UT Martin

Martin, TN – Austin Peay State University’s baseball pitcher Alex Robles [1] hit for the cycle and right fielder Chase Hamilton [2]‘s three-run home run provided the game securing runs as the Governors bounced back to win a 8-5 contest against UT Martin in the second half of a doubleheader at Skyhawk Field.

Austin Peay (20-21, 11-12 OVC) entered the seventh inning holding a 5-4 lead and starting pitcher Alex Robles [1] led off the frame with a triple that eluded the right fielder’s glove. 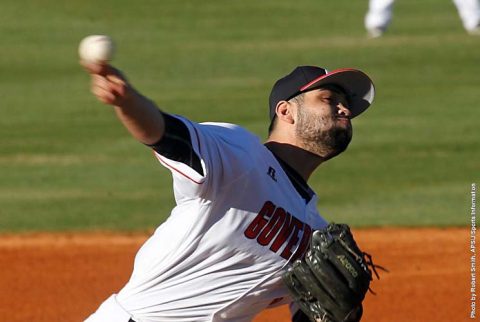 Left fielder Cayce Bredlau [3] walked and then caught the UT Martin defense unawares, stealing second base before the pitcher could get back on the mound.

Right fielder Chase Hamilton [2] then took the first pitch he saw and hit a long home run to right field to give the Govs an 8-4 lead.

UT Martin (19-23, 8-13 OVC) got a leadoff home run from left fielder Connor Aube in the bottom of the seventh, instilling a sense of déjà vu briefly into the proceedings. But Govs reliever Caleb Powell [4] did not allow another ball out of the infield in the inning, holding the score at 8-5.

In the eighth, the Skyhawks led off the frame with first baseman Ryan Helgren’s double. Center fielder Creight Eldridge then reached on an infield single against Govs reliever Brett Newberg [5] without advancing Helgren. Newberg then would induce consecutive ground outs that saw the Govs get the force out at third base before a fly out ended the threat.

Newberg would not allow any drama in the ninth, inducing a fly out and back-to-back ground outs to end the game and wrap up his season’s first save. He retired six of the seven batters he faced and allowed just one hit over the final two innings.

Govs starting pitcher Alex Robles [1] (4-7) picked up the win after holding the Skyhawks to four runs on nine hits over six innings. Impressively, the right-hander did not allow a walk while striking out six batters.

However, Robles’ impressive day was not limited to the mound as he went 5-for-5 at the plate with two RBI. He also recorded the first cycle by a Govs hitter since 2005. Robles hit a double in the first, a single in the fourth, added a two-run home run in the fifth in front of his seventh-inning triple.

Robles would tack on an eighth-inning single for good measure.

Hamilton’s three-run home run capped a 2-for-3, four RBI outing. He also had a sacrifice fly that drove in the Govs first run in the fourth inning, was hit by a pitch in the second and singled in the sixth.

UT Martin starter Peyton Cain (1-4) was saddled with five runs on 10 hits and three walks over his six innings and too the loss.

Eldridge paced the UTM offense with a 3-for-4 outing that included a solo home run in the fourth. Helgren also went 2-for-4 with two RBI.

Starting pitcher Alex Robles [1] had a banner day on the mound and at the plate. In his first OVC start since April 7th, the right-hander notched a victory after limiting UT Martin to four runs over six innings. He did not allow a walk to the 27 batters he faced while striking out six batters.

Meanwhile, he became the first Govs hitter to hit for the cycle since 2005 while going 5-for-5 with two RBI at the plate.

Moving Up The Home Run List
The Govs two home runs in the series finale were their sixth and seventh of the three-game set. Austin Peay finished the weekend with 64 home runs in 2017, jumping into a tie for fourth most in a single season with the 1996 squad. The Govs are now just nine home runs shy of breaking the program’s single season home run record.

Hamilton Into Top Six
Hamilton’s game-securing three-run home run was his 31st career home run. He moved into sole possession of sixth on the Govs career home runs list, one behind Logan Gray [7] for a spot in the top five.

Another Five-Hit Affair
Robles’ five-hit outing was the second by a Govs hitter this season. He joined second baseman Garrett Giovannelli [8] who had his five-hit outing against Western Kentucky, Tuesday.