Lepley is pursuing his Bachelor of Science in political science with a minor in military science from APSU. 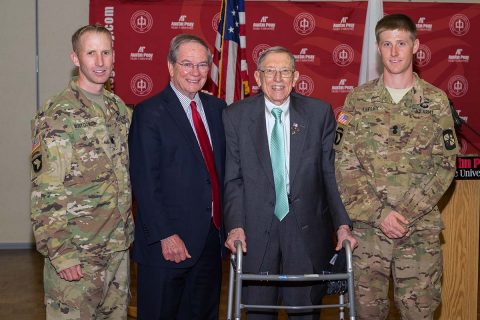 A high-achieving student earning his degree through the University’s Green to Gold ROTC program, Lepley holds a cumulative GPA of 3.94.

Upon graduation, Lepley will serve in the U.S. Army’s field artillery branch before transitioning to the military intelligence branch, after acceptance to the Captains Career Course.

Lepley has been on active duty in the U.S. Army for eight years. He has served three combat tours, including two to Afghanistan and one in Iraq.

As a member of APSU’s Governors Guard Detachment ROTC program, Lepley served as the Blitz Mentor in the spring semester and as PT Mentor during the fall semester.

A native of Elizabeth, Pennsylvania, Lepley is the son of Buddy Lepley and Claire Laney. He is married to Paloma Lepley, a teacher at Kenwood Elementary School in Clarksville.

Lepley is the sixth ROTC cadet to receive the Command Sgt. Maj. Darol Walker Award, following Jose Ramos-Lopez in 2016, Kevin Doss in 2015, Daniel Davis in 2014, Nathan Brewer in 2013 and the first recipient, Nicholas Shumpis, in 2012.

Before retiring from service and starting his career with Turner in 1977, Walker served as a command sergeant major in the U.S. Army, was a highly-decorated Vietnam Veteran and later served as senior military instructor for APSU’s ROTC program.