The Ohio Valley Conference Hall of Fame was organized in 1977 with the intent of honoring the coaches, administrators, faculty and staff that have been associated with the OVC for at least five years and provided extensive and outstanding service to the Conference. 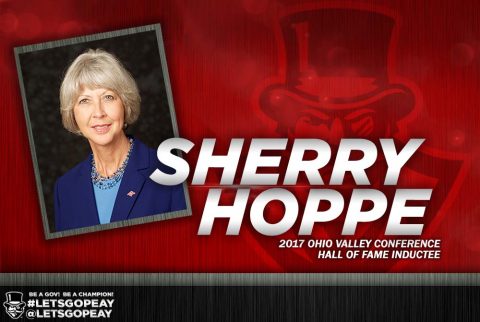 With the induction of this year’s class, the membership will reach 81. Hoppe becomes the ninth individual associated with Austin Peay to be inducted into the OVC Hall of Fame.

Dr. Hoppe became interim president at Austin Peay in 2000 after 12 years at Roane State Community College. Her efforts managing the University’s budget during a difficult financial time led to her being named the University’s first female president in 2001.

A little more than a year into her presidency, the University was slammed with a second financial crisis, one that saw Austin Peay and other state agencies closed in July 2002 when the state legislature was unable to pass a budget. Although the University was closed for only a few days, it resulted in budget tightening that saw multiple positions not filled, including athletics.

Despite the cutbacks, APSU athletics continued to thrive. During her presidency, Austin Peay captured 19 championships, along with the OVC’s Academic Achievement banner for the 2002-03 year.  In addition, soccer was added in 2002 amidst the financial crisis, playing their initial contests at a local park, before later the on-campus Morgan Brothers Soccer Complex was completed in 2005.

In addition, Dr. Hoppe spearheaded improvements to then-Governors Stadium, including a new football turf (Polytan Turf) and a new track surface that would be utilized for the 2005 OVC Track and Field Championship. In addition, at the same time the LED Video display also was constructed.

Under Dr. Hoppe’s leadership, the University hosted the Tennessee Titans training camp in Summer 2006, which led to other stadium and athletically-related upgrades, including some paid for by the Titans.

At the same time Dr. Hoppe and the University were negotiating with the Titans to come to Austin Peay, she also fulfilled a promise to Governors football alums. In Spring 2005, Hoppe announced the University would return to scholarship football in Fall 2006 and rejoin the OVC a year later—after a decade of competing at the non-scholarship level.

As soon as the Titans departed camp in August 2006, the construction of the David P. Roe Academic Center of Excellence was completed in the South end of the Dunn Center, the same location of the media center for training camp.

Austin Peay became the first school in the OVC to utilize LED video displays for basketball with it first generation installation in 2004 at the Dunn Center. Chairback cushion seating was installed in the Dunn Center lower level in 2004, replacing bleacher seating, followed by second-level seating in 2007.

At the behest of Hoppe as she was heading into retirement in 2007, the basketball floor was named Dave Loos Court to honor him becoming the OVC’s all-time wins leader.

Also, in 2007, Dr. Hoppe became the first University President to be inducted—as an honorary member—into the Red Coat Society, a Hall of Fame for service to APSU Athletics, as a result of her commitment and interest in APSU Athletics and student-athlete welfare.

At the university level, Dr. Hoppe’s tenure was marked by growth. She spearheaded the first capital campaign in Austin Peay history, ultimately securing $31 million in gifts and commitments. She oversaw the construction or renovation of eight on-campus buildings, including the Foy Fitness and Recreation Center, the Sundquist Science Complex, Hand Village and the Morgan University Center, as well as Austin Peay’s Center at Fort Campbell.

Despite living in Chattanooga, Hoppe has continued her longtime support of APSU and the athletics department as President Emeritus. She remains a fixture at APSU athletic events, including attending all Red Coat Society induction ceremonies. She also has written eight books.

Joining Dr. Hoppe as an OVC Hall of Fame Inductee will be former Belmont and Murray State Athletics Director Mike Strickland. The June 2nd OVC Honors Brunch will be held at the DoubleTree Hotel in downtown Nashville.