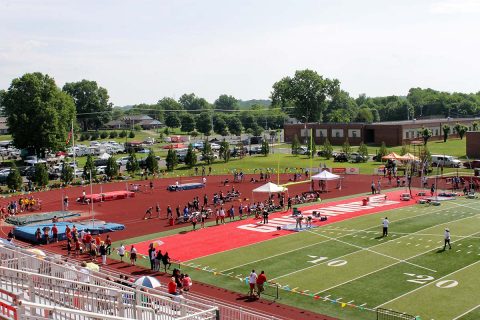 Nearly 6,000 players and spectators, including 138 teams from five states, were part of the Queen City Cup Soccer Tournament, an open invitational hosted by the Clarksville Soccer Club. The three-day event at Heritage Park featured 220 matches and attracted teams from Kentucky, Ohio, Indiana and Alabama, along with Tennessee.

“Sports marketing has been, and continues to be, one of our top priorities,” says Visit Clarksville Chairman Louisa Cooke. “We have first-class venues for such a variety of events, we’re easily accessible from throughout the state, and we have plenty of hotel rooms to accommodate state-wide events. This makes Clarksville a great sports competition destination.”

June 2nd-4th, 2017 is another multi-event weekend for Clarksville with the AAU Super Qualifier Basketball Tournament and the Pro Tour Horseshoe Tournament.

A new event for Clarksville, the Tennessee/Kentucky Future Stars Classic is a football game for showcasing the talents of the best seventh and eighth graders in both states. Athletes will take to the field at Fortera Stadium on June 17th, 2017. About 5,880 players, coaches and spectators are expected to attend.

Visit Clarksville is governed by nine board of director members who are selected jointly by the City of Clarksville and Montgomery County Mayors, and is funded by a portion of the local hotel-motel tax.