Clarksville, TN – On Sunday, June 4th, 2017, at approximately 12:02am, Clarksville Police Officers responded to a vehicle accident involving a fatality in the area of Franklin Street near University Avenue.

Arriving officers located an adult male, deceased at the scene, who was driving a Suzuki SUV and an adult female, with injuries, inside of a Ford Fusion. She was transported by Air Evac in critical condition to Vanderbilt University Medical Center. 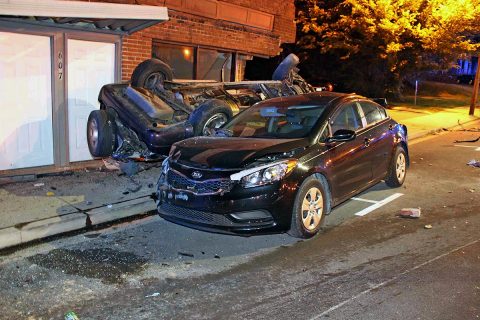 A Suzuki SUV and Ford Fusion were involved in an accident on Franklin Street near University Avenue. (Officer Jennifer Szczerbiak, CPD)

Fatal Accident Crash Team (FACT) Investigators responded to the scene and discovered that four other vehicles at the scene and a building had been struck.

FACT Investigators were able to determine that the deceased adult male and the adult female had a previous domestic relationship.

FACT Team and Homicide Unit investigators are working, in conjunction, on the case due to the domestic history between the parties. Names are being held pending notification of the next of kin.

This is an ongoing investigation. Additionally, Police are still trying to locate owners of two unoccupied vehicles hit at the scene.