Right fielder Jaff Decker was in on both in his sixth multi-homer game of his career. With Omaha leading 1-0 in the top of the second, Decker belted a home run to left field just moments after Matt Chapman drew a walk. Decker’s first long ball of the season gave Nashville (30-26) the lead for good at 2-1.

On the very next pitch from Omaha starter Josh Staumont, Matt McBride clobbered a solo homer to deep left field to extend the lead to 3-1. 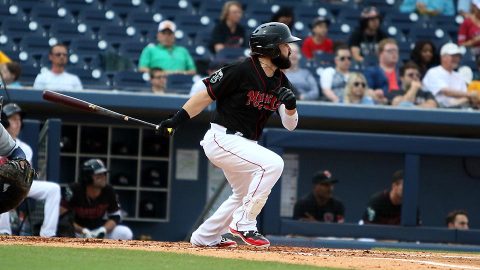 With one out in the fourth, Ryan LaMarre started another rally with a single to center. Two batters later, Jaycob Brugman lined an RBI triple to the right-center gap to make it a 4-1 game.

While the offense was chewing up Staumont, Sounds starter Michael Brady was dialed in. Making another spot start, Brady was dominant in his third win of the season. The right-hander worked five innings and allowed one run while matching a career-best 10 strikeouts. He struck out three in the first and recorded at least two strikeouts in all of his innings except the second.

Nashville struck with the long ball again in the fifth. With one out, Renato Nuñez singled to put a runner on for Chapman. The third baseman drilled an offering from Staumont into deep left field for a two-run homer and 6-1 lead. It was Chapman’s 14th of the season, one shy of the Nuñez’s team-high 15.

Decker followed Chapman and launched a 3-2 pitch out to left field for another home run – his second of the game.

With two Tuesday afternoon, the Sounds have gone back-to-back four times this season. Decker joins Chapman and Matt Olson (twice) as Sounds to have a multi-homer game in 2017.

Chris Jensen followed Brady with two scoreless innings in relief before giving way to Aaron Kurcz in the eighth. The right-hander allowed a two-run homer to Jorge Soler before Jake Sanchez shut down the Storm Chasers in the ninth.

Game three of the four-game series is set for Wednesday night at Werner Park. Right-hander Chris Smith (3-2, 3.35) starts for Nashville against right-hander Christian Binford (3-2, 3.94) for Omaha. First pitch is scheduled for 7:05pm.

The 2017 season is the Sounds’ 40th in franchise history and their third as the Oakland Athletics’ top affiliate. Season ticket memberships are available now by calling 615.690.4487 or by visiting www.nashvillesounds.com [1]